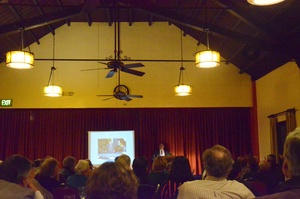 awards ceremony CC SA-BY Our OaklandIn 2014, the Oakland Wiki won a Partners in Preservation Award from the Oakland Heritage Alliance in the Education category for documenting Oakland history.

Motivated by mk30, eekiv and Gene applied for the award on behalf of the Oakland Wiki community. Read the application here: OHA_appliation.pdf. I've requested the award say "The Oakland Wiki Community" (unlike the press release and following articles—d'oh!)

The awards ceremony was February 20th, 2014 at 7pm at the Rockridge Masonic Temple at 5449 College Ave.

If you've contributed to the Oakland Wiki between the start in July, 2012 and December, 2013, please make sure your name is added here. I've included the real names of people who were already outed in the article :-)