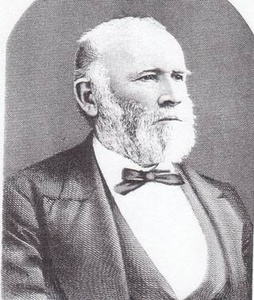 Dr. Rector Elisha Cole (November 20, 1819 - October 15, 1890) was the 4th dentist to practice in Oakland, early member and then president of the Oakland Board of Education, Oakland City Council member, and donated the land for Cole Elementary School which was named for him.  Oakland schools were desegregated in 1870 while Dr. Cole was on the Board of Education, with Cole becoming its president in 1873.

Born in Madison, Granger County, Ohio, in 1829 the family of nine children moved for better educational opportunities to Oberlin.

Cole met his future wife Mary Philanda Finney (Cole) in Oberlin, and the two married on October 6, 1847 in Newburyport, Massachusetts. Together, the couple had three sons.

Following the death of his beloved sister, and due to his own poor health, Cole move to the warmer climate of New Orleans, Louisiana. Cole worked in a dental office for two years in the capacity of both assistant and student, having previously read several practical works on dentistry.

Cole secured a job as assistant assayer in San Francisco in 1849, and to there he traveled on the steamer Galveston. The voyage took 54  days, crossing the Isthmus, reaching Panama in April, 1849. From there Cole traveled on the Humboldt, leaving Panama on May 20th and arriving at Acapulco, Mexico, where he disembarked to care for a sick companion. Following the death of his friend,  Cole found passage on the English ship, Unicorn, arriving in San Francisco on October 10, 1849.

After arriving in the Bay Area, Cole resumed his former profession, opening a dental practice on Clay Street. The couple lived in San Francisco for seven years before settling in Oakland, California in July 1858.

Mary Finney Cole was very active in Oakland's social, religious and philanthropic worlds.  Her uncle, Charles Grandison Finney, was the second president of Oberlin College in Ohio.  Oberlin has the distinction of being the first college in the US to desegregate and admit women.

Poor health lead Cole to visit the eastern United States in 1871, and after a brief stay he returned to Oakland and continued his dental practice.

Cole Elementary School was named in his honor, in grateful recognition for all his years of service. A generous man, Cole lived on 10 acres at 10th and Adeline Streets, which he donated for the construction of the school.

Cole assisted in the organization of California Lodge of F. and A.M. in 1849, serving three years as master, and was also a member of the State Grand Lodge. A long time of the Congregational Church, Cole was one of the organizers of the First Congregational Church in Oakland, moderator of the church's Board and served seven years as Superintendent of the church Sunday school.

A Republican, Cole a member of the first Republican Convention held in California. 3

In 1860 Cole was elected to the Oakland City Council. He was also an original officer of the Oakland Bank of Savings.2& Cole Street in East Oakland was named in his honor.