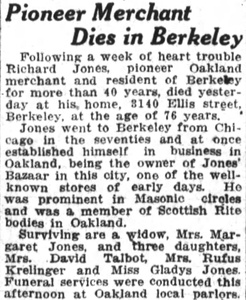 Richard Jones (September, 1842 - January 10, 1919) was the proprietor of Jones' Bazar, a shop carrying "crockery, toys, glassware, and fancy goods." He also had a millinery store and a bowling alley and gym for a time.

Jones was born in September, 1842 in Wales. After immigrating to the U.S. in 1871, he met and married Margaret Williams (Jones) in 1874. They had one son, Charles R. Jones, in Chicago, Illinois, in 1876, then came to the Bay Area. Here they had 3 daughters: Sarah Oliver Jones (Kerlinger), Mary Alice Jones, and Gladys May Jones. The Jones family moved a number of times, but eventually settled at 3140 Ellis Street in Berkeley, where they lived for many years. 2

A supporter of Welsh culture, Jones hosted the 1886 meeting where a local Welsh society was formed. 3 In 1888, he sent 1,000 copies of California, Y Wlad I Ymfudwyr: Traethawd Buddogol, Eisteddfod Oakland (California, Country For Migrants: Winning Essay, Oakland Eisteddfod) to Great Britain. It was a pamphlet in Welsh describing the attractions of California, including the wonderful weather. 4 Jones was also a Scottish Rite Mason. 2