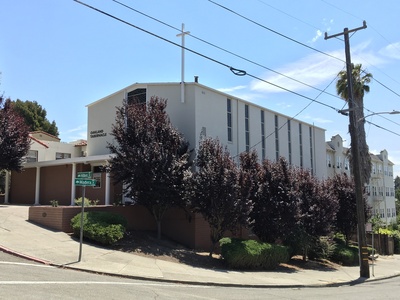 St. Andrew's Episcopal Church was a long-time church at a number of locations, originally in West Oakland beginning in 1881, and after 1922 at 5201 Hillen Drive in Maxwell Park. It was active until at least 1974.

The earliest mention is St. Andrew's Episcopal Mission, on 8th St. near Chester, in 1881. 1 By 1887, the church was at 9th and Cypress. In 1903, the church bought a lot at 12th St. and Magnolia in order to move the building, but they ran into difficulty with the city. 5 By 1904, they had moved [ unclear if moved the building or built a new one. ] In 1922, a temporary building was constructed at Fleming and Madera in Maxwell Park. 7 Some of the furniture was moved from the old church. 3

c.2002, the building was used by East Bay Bible Church. c.2018 it is shown in Google Maps as Oakland Tabernacle.

Rev. John A. Emery was the head of the church from the beginning of the mission until he resigned in 1890 to become diocesan missionary. 5

Alma A. Crowley was the long-time organist and choir director until her death in 1932. 8 Crowley was also an author and a composer, writing the words and music to My California Rose under the pseudonym August Dalma. 9