For many years, the phone company used named Telephone Exchanges to refer to blocks of numbers. Initially, they were just station names; later, the first two letters of the name corresponded to the first two digits of the phone number, with 2=ABC, 3=DEF, 4=GHI, 5=JKL, 6=MNO, 7=PRS, 8=TUV, 9=WXY, 0=Z (note there is no Q). For example, the number for the Paramount Theatre in 1944 was TWinoaks-2300, or 892-2300. The rapid growth of phone numbers and the addition of direct-dialing (especially for long distance) led to the phase out of name exchanges.

In the early days, reaching another number meant lifting the receiver, waiting for the operator, and then asking for the person. This quickly evolved into named stations and a series of 2, 3 or 4 digits. At the time, being in the same exchange meant the 10,000 possible phone numbers were connected to the same physical switching system, and so generally referred to a geographic area. Initially the numbers were 2 letters plus 2-4 digits; later that expanded to 2 letters plus 5 digits ("2L-5N").

A related topic is area codes, which went through a similar expansion. The 415 area code was one of 3 area codes in California created in 1947. On September 2, 1991, the 510 area code was split off to cover the East Bay including Oakland. 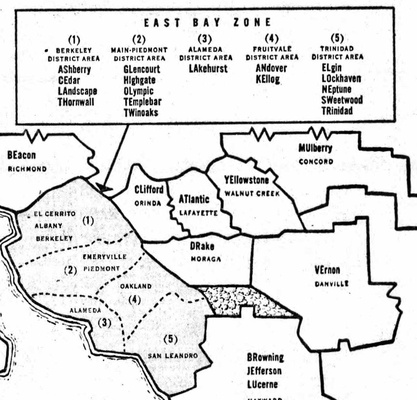