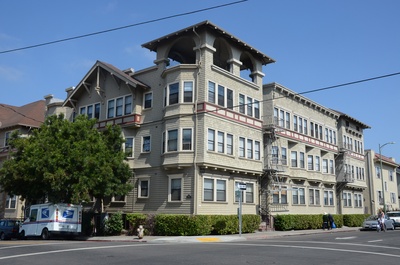 The Vue du Lac Apartments at 302 Foothill Blvd. were built in 1906 by builder Charles MacGregor.

The large, 3-story wood-shingle building has a roofed deck on the west corner, making a distinctive 4-story tower.

According to the manager in 2016, the building was used for officer housing during both WWI and WWII. The building was damaged in the 1989 Loma Prieta Earthquake, and knocked out of plumb. The owners spent a lot of money and time and had the building repaired.