The Who Stole The Sun Mural was painted in July, 2013 by the Community Rejuvenation Project. More photos are available here, here, and here.

The words are based on an original rap by Super LP Raven (Stoney Island), based on traditional Northwestern Coastal Folktale.

The mural is located at Thomas L. Berkley Way (20th Street) and Telegraph in Uptown, wrapping around the Angel Beauty Supply building.

As of June, 2014, it appears a portion of the mural has been painted over. See this photo. 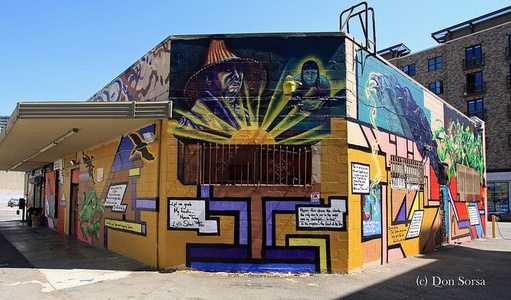 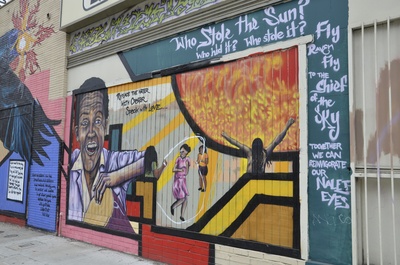 photo CC BY-NC-ND 2.0 by William Newton
"Who stole the sun? Who hid it? Who stole it? Fly raven fly to the chief of the sky. Together we can reinvigorate our nalef (?) eyes." 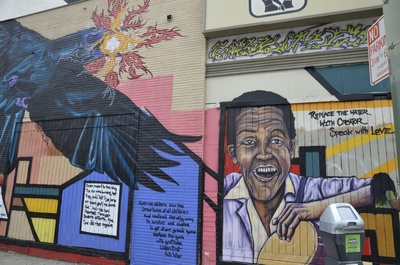 photo CC BY-NC-ND 2.0 by William Newton"Replace the hater with creator. Speak with love."

"Raven made it to the sky.

The sun was burning hot.

And the sun dropped.

The sun did rise again."

"And the elders saw the importance of all children

Replace the guns with gratitude