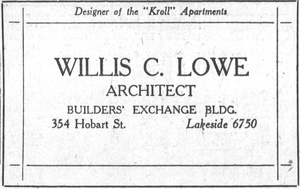 Lowe was born in San Francisco, and was a veteran of the Spanish-American War. He attended Vander Naillen's School of Engineering, then received a bachelor's degree from U.C. Berkeley. 1

In addition to architecture, Lowe was a director of the Morris Plan Co. at 1763 Broadway. 2