Boylan Heights is one of Raleigh's historic neighborhoods.  Boylan Heights consists primarily of single family homes, many of them historic. The majority is owner occupied, but there are also many rentals.  Some homes date back to the 1910s and 1920s, and there are homes from just about every decade. 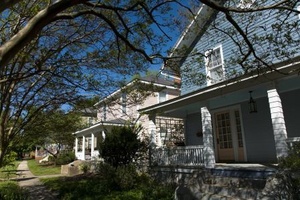 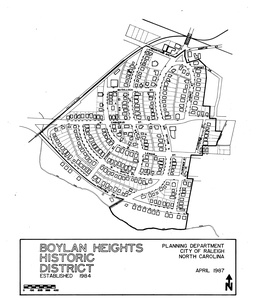 Architecture
Boylan Heights is one of Raleigh's earliest planned suburbs and its layout contributes heavily to the neighborhood's distinctive character. The curvilinear street plan wraps around the hills of the neighborhood while rear alleys bisect each block, providing hidden access to garages and service areas. Mature shade trees line the streets and front porches and concrete sidewalks provide a pedestrian zone between the street and the residential interiors.

Architecturally, Boylan Avenue is the showpiece of Boylan Heights and deed restrictions and covenants ensured that the neighborhood's largest dwellings would line the street. Required front-yard setbacks are also deeper along Boylan Avenue than on other neighborhood streets, creating more expansive lawns to set off the large houses. Architectural styles found on the street include transitional Queen Anne/Colonial Revivals, Dutch Colonials, and foursquares with Colonial Revival or Craftsman detailing.

Despite the varied housing stock on Boylan Avenue, the bungalow is the most dominant house type in the neighborhood. Bungalows, often rendered in the Craftsman style, fill the smaller parcels on the cross streets and the streets at the edges of the district.

History
When real estate firms began developing old plantation lands just beyond the city limits in response to the early twentieth century housing shortage, the hundred-acre wooded portion of William Montford Boylan's estate offered a good location. It was just west of downtown and the hilly terrain lent itself to a picturesque, curvilinear street plan. Parcels went on sale in 1907 and all were sold by 1915. A large parcel reserved from the sale provided space for a neighborhood park in the middle of the development.

Construction proceeded more slowly than the sale of land and continued through the late 1920s. In 1926, as Boylan Heights filled with family-friendly houses, a neighborhood school built in the park opened its doors. The neighborhood was the ideal middle-class residential development of the early twentieth century. Architecturally conservative dwellings were in keeping with Raleigh's overall appearance in the early twentieth century. The variety of house styles and sizes created a hierarchy of streets within the neighborhood, with Boylan Avenue being the finest in the development. The flanking Cutler and Kinsey Streets were secondary to Boylan Avenue. The neighborhood's extensive collection of modest bungalows populate the remaining streets in Boylan Heights, where smaller lots and shallower setbacks create a dense grid.

The Great Depression hit Boylan Heights hard. White-collar residents moved to newer suburbs in the 1930s, while many blue-collar residents lost their homes. Houses became rentals and the larger dwellings were divided into apartments. This trend persisted into the 1980s, when historic preservation and a renewed interest in urban housing helped convert Boylan Heights back to a neighborhood of predominantly owner-occupied dwellings. Many houses have been renovated to provide additional living space and have been updated to accommodate modern lifestyles. A strong neighborhood association has also helped Boylan Heights return to its roots as a middle-class neighborhood of homeowners and families.

Boylan Heights hosts the annual Boylan Bash, a neighborhood-focused "block party" at the end of the summer. Every December, the Art Walk in December draws visitors from far beyond the neighborhood and Raleigh.

Boylan Heights is home to Project Enlightenment, a school in the Wake County Public School System. It is located in the building of the former Boylan Elementary School. Traditionally, Wiley, Daniels(?) and Broughton were the schools for kids from Boylan Heights, but school assignment is currently in flux...