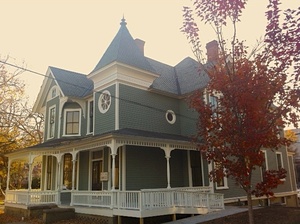 The Cowper house was built in 1895 for United States district attorney Claude Bernard. At the turn of the century, Brian Grimes Cowper moved his family from their farm at Five Points in Raleigh to this home on North Blount Street. Mr. Cowper and his partner Bryan Grimes owned an insurance agency on Fayetteville Street. Cowper was active in community civic affairs, serving on the original board of trustees for Raleigh’s first public library, the Olivia Raney Library in 1899. Cowper’s daughter, Mary Grimes Cowper, married Currin G. Keeble in 1925 and they lived in the family’s home through the 1950s. The house later served as offices for the North Carolina architectural licensing board in the late twentieth century.

The two-and-one-half-story frame house is a completely intact and delightful example of the picturesque Queen Anne style popular at the turn-of-the-century. With its tall hipped slate roof, slate gables, its square corner tower with a slate belfry with metal finial, and a two-story front bay window, the house is a visual feast of this Victorian style. Details such as the decorative wood brackets framing the cutaway upper bay window, the rosette window in the tower, and the completely original wraparound veranda with bracketed posts and a decorative balustrade complete this attractive building.

Purchased and renovated in 2011.