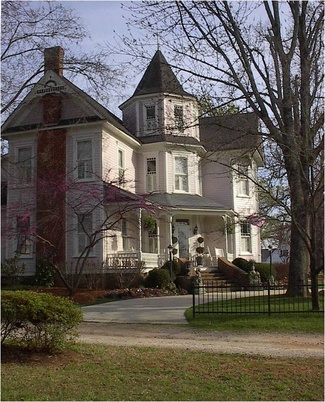 Photo courtesy of
Friends of the Page-Walker Hotel

The Guess-Ogle House was built in several stages beginning in the mid-19th century. This 3-story frame house is the most prominent dwelling on S. Academy Street in Cary. Railroad “roadmaster” Captain Harrison P. Guess and his wife, Aurelia, purchased the property from Frank Page, Cary's founder, in 1880 and erected their home.

The house was expanded and remodeled by John White, a Baptist minister, who purchased the property in 1896. Local tradition holds that White added the tower so that he could look out over the town while writing his sermons. Mr. And Mrs. N.G. Yarborough, parents of Dr. Frank W. Yarborough, are said to have owned the property for many years. Their son’s former home and office are on an adjacent lot. The property has had several owners in the late 20th century. The current owners, Carroll and Sheila Ogle, restored the house to its former glory and current state and reside in the home.

The garage in the rear also is a contributing structure to the Town Center Historic District. This house has a preservation easement and was designated as a Wake County Landmark in 2008.