North Hills is an open air mixed use development that sits at the interchange between Six Forks Road and I-440. First opened in 1967 as an enclosed mall, the shopping center has since evolved into the centerpiece of what is now known as Midtown Raleigh.

North Hills is a sprawling development stretching across Six Forks Road. The area is bounded to the north by Rowan Street, to the south by I-440, to the east by Saint Albans Drive, and to the west by Lassiter Mill Road. The development consists of two distinct districts, separated by Six Forks Road. The older of the two developments consists of numerous boutiques and restaurants, as well as the area's two anchor stores. The newer development, located east of Six Forks, provides more retail space, as well as towering office buildings and apartment complexes.

In mid 2019, it was announced that JCPenney, North Hills' oldest anchor store and the last remaining building of the original mall structure, would close due to declining sales. The store was originally expected to close on April 26, 2020, but was delayed due to all stores closing nationwide in response to the COVID-19 pandemic; the store closed its doors for the final time on July 26, 2020. 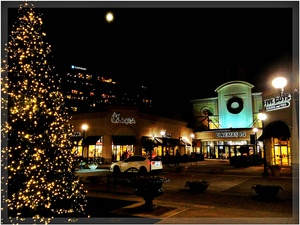