Interstate 440, also known as the Raleigh Beltline, the Cliff Benson Beltline, or simply The Beltline, is a 16-mile Interstate highway surrounding the west, north, and east sides of Downtown Raleigh. 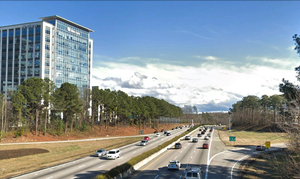 I-440 at its interchange with Six Forks Road, looking east.

The first section of the Beltline was completed in 1960, with the segment between Walnut Street and the former eastern terminus of I-40 (today's Wade Avenue). The segment featured a seedling of the US 1 bypass around Cary and Raleigh. Later in 1963, the freeway was extended around the city, ending at Capital Boulevard (then known as North Boulevard). After the roadway was extended to New Bern Avenue in 1965, US 64 was rerouted outside of Downtown Raleigh to follow the new freeway all the way around the city. The final segment of the Beltline was completed in the mid-1980s along with the completion of I-40 around the south of Raleigh. Shortly after the opening of the segment, US 64 was realigned to its modern routing that follows I-40 around the south of the city, while US 70, NC 50, and US 401 were all routed along portions of the beltway. In response to driver confusion about which route ended where, NCDOT received federal approval to designate the entire Beltline as I-440. Following the official designation of the Interstate in 1991, all US and NC highways were restored to their former routes through Downtown Raleigh, with the exception of US 1 and US 64, which still run concurrently with the Interstate. Throughout the 1990s, the NCDOT upgraded much of the Interstate to modern standards, with the only section remaining four lanes wide being the segment from Walnut Street to Wade Avenue. In 2008, I-440 was removed from its concurrency with I-40, leaving behind the northern two-thirds of the route.

I-440 begins at I-40's exit 293 in West Raleigh and travels due northeast through largely residential land. The freeway has an interchange with Western Boulevard, then with Hillsborough Street before proceeding north. After the Wade Avenue interchange, I-440 cuts through more residential as it makes its way past the Lake Boone exit, and curves around its northernmost arc, passing by the Crabtree Valley Mall and North Hills shopping centers at Glenwood Avenue and Six Forks Road, respectively. The roadway then turns to the southeast to connect to Wake Forest Road, Capital Boulevard, and New Bern Avenue, before turning to the south. Two last intersections with the I-87/US 64/US 264 freeway and Poole Road meet the highway before it curves to the west and terminates at I-40's exit 301.

In 2019, NCDOT began construction on a $475 million project that will widen I-440 from Walnut Street in Cary to Wade Avenue in Raleigh to six lanes. Completed in 1960, it is the oldest section of the beltway and is the last remaining section of I-440 to carry the original four lanes of traffic. The project will upgrade this notorious section of the Beltline to modern Interstate standards, which includes widening the shoulders, installing sound walls at nearby neighborhoods, and reconstructing several interchanges along the route, which feature substandard geometry, short acceleration and deceleration lanes, and in the case of Western Boulevard, a left-lane entrance ramp. The interchanges that will receive the most changes are Western Boulevard and Wade Avenue. Western will be redesigned into a diverging diamond interchange--one of several planned for the Triangle. Meanwhile, braided ramps between the Hillsborough Street and Wade Avenue interchanges as well as flyover ramps connecting I-440 to Wade will be constructed . Construction work is expected to last four years.

Preliminary plans for a $151 million project to make improvements to the interchanges at I-40 and Walnut Street near Cary's Crossroads shopping center were made available to residents at a public meeting  held by NCDOT in May 2019. The project seeks to simplify the flow of traffic between the shopping center and the interstates and improve safety along the corridor. Construction will begin in 2022 along with a separate $27 million project that will add lanes to I-40 from I-440 to Lake Wheeler Road.

As part of an effort to reduce traffic congestion near Crabtree Valley Mall, NCDOT is proposing a  $231.3 million project that will redesign the Glenwood Avenue interchange, with the goal of separating local Crabtree Valley traffic from US 70 through traffic. The project also seeks to improve the  existing intersection between Glenwood and Blue Ridge/Lead Mine roads, replace the bridge that carries Blue Ridge across Crabtree Creek, and possibly extending Crabtree Valley Avenue. Originally scheduled to begin work in 2019, the project was pushed back to an unspecified date.