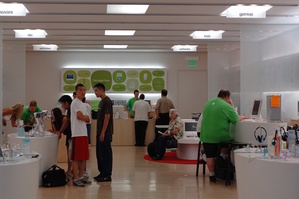 Located in the Arden Fair Mall, the Apple Store is a retail storefront that is owned and operated by Apple and provides sales and technical support for Apple and Apple related products. Like the store on the CSUS campus, this one honors the Apple Educational Discount for college students (just present your student ID and your driver's license - or if you don't drive, give your address and social security number) (note that the in-store educational discounts apply only toward hardware; you must purchase via Apple's online store to receive the software educational pricing).

I purchased my iBook G4 from this store and have had nothing but terrible experiences with their management. I went through 5 repairs on my iBook before the manager agreed to refund or replace my laptop. He also lied (telling me he could not refund or replace it). I had spoken with him about getting my unit replaced or refunded and he shipped it off for repair, didn't return my calls until it was back from repair, and then called me saying "It's all fixed and back from repair!" Eventually he agreed to replace my unit. I would suggest you not bring in defective hardware (that you know is broken — e.g. you're tech savvy and a simple swap of the HD/etc won't fix it) to the store and instead deal with Apple directly via their 800 number/ship them the machine — unless it's something simple like an iPod (that they will likely just switch out for you). Their Genius Bar is good and they are really polite here. I am just referring to the manager.

Bringing Apple products here for fixing is a good idea, but keep in mind that the Genius Bar folks can only do so much. They will try and help you, but if it's something they can't fix then they will ship it off for repair. Repair is a good thing, but you might run into trouble in dealing with the management of this particular store if it's clear Apple cannot repair your hardware.. —PhilipNeustrom

2005-12-02 17:53:46   My PowerBook G4 1.3GHz 15" began acting up in Aug05. So, I took the laptop in and had it returned to me a few days later supposedly fixed. In Oct05, the laptop acted up again, much worse this time. So, on 02Nov05, I brought it back to the Apple Store, waited 45min past the appt. time until their "Genius" staff got to me, at which point I kept having to repeat myself because the guy wasn't listening to my responses to his questions. I told him he could have the laptop for a week if that meant he found and completely fixed the problem. It turns out that he thought I said "please ignore my laptop for a week and then only start looking at it when I call for a status update." To make a much-too-long story short, after 35 days of no laptop, I was finally given a new one to replace my broken one. What an ordeal! —GrahamFreeman

2005-12-08 00:58:59   Philip — a lot of people will try to shit in your hand and try to convince you it's chocolate. Seems like your persistence paid off though — Kudos! It's a lot more rewarding to be busting the balls than having your balls busted. I think you'd be surprised how many people would've given up after the manager told you he couldn't replace your G4. —DerekBorba

2005-12-08 11:48:23   Make sure if you ship something to Apple for repair to take out any 3rd party hardware you've installed, people have been known to lose laptop RAM this way. —DavidReid

2006-04-10 22:33:04   Hey, I've been there. I stood behind a salesperson and told my friend real loudly that the iBooks were made of cheap plastic that squeaked when you closed the lid. The salesperson looked so uncomfortable —MatthewKeys

2006-05-19 12:30:43   I received a 20 gig iPod for Christmas and it broke after less than two months. When I went to the Apple Store to get it fixed or replaced I had to wait behind 4 people even though I had made an appointment. A few minutes later the 'Genius' was nice enough to tell me that the store was closing in 5 minutes and that he probably wouldn't be able to get to me in time. He pretty much said "Sorry, kid. Better luck next time." But being from Davis and without a car new there wouldn't be a next time for a while. Instead of leaving with my tail between my legs I chose to stand my ground knowing that I made an appointment. Just because the 'Genius' overbooked shouldn't mean I have to suffer. So I stayed in line and lo and behold 15 minutes later he served me. I got a new iPod and a moral victory. It seems that from the comments some of the people at the Apple Store will try to give you crap. The best thing to do is to just stand your ground. Be strong, and you'll get the respect and help you need. —SteveKent

2006-08-19 15:42:54   I really love the environment of this store. The sales reps know their Macs and have always been pretty helpful everytime I've gone in. —MoTorres

2007-01-22 17:36:24   If you need an Apple product repaired, it's honestly better to send it into Apple directly than to go to these stores. While minor repair might be alright, going through the Genius Bar requires the store order what parts are needed for your repair, and from my own experiences, this is often _weeks_ longer than the six day turnaround a mail-in repair takes. —ChrisThielen