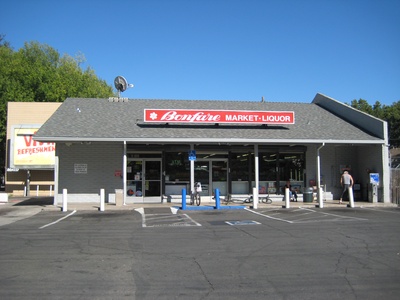 The Bonfare Market on 20th Street is just one of several independently owned Bonfare Market Franchises located throughout Sacramento. The market is located in a run-down building on the corner of 20th and H Streets. The market includes a small gas station and is the only market in the Boulevard Park neighborhood that sells liquor. The overall condition of the market, combined with the "rougher crowd" that is can attract - especially at night - has made it a target of the Boulevard Park Neighborhood Asscociation which has tried unsucessfully to have it closed down.

How does the Bonfare market on Broadway differ?

2007-07-25 15:42:56   anyone who uses their atm or credit card at the bonfare market should check their reciept very carefully. my roommate bought a pack of cigarettes and a week later there was a $505 charge on her credit card. Her bank informed her that $500 of the sale was for a money order. When we confronted the owner, she said that it was impossible, as they do not accept credit cards for money orders. We knew what employees was working that night - turned out to be her son - and asked to see the security cameras. The tape from that night was "lost." Luckily the bank was able to get her money back. Several of our friends have had similar experiences, albiet mcuh smaller amounts. Now my roommate refuses to go back, but I still do, because the old Indain man who sometimes works there cracks me up. I just always check my receipt. —cms1978