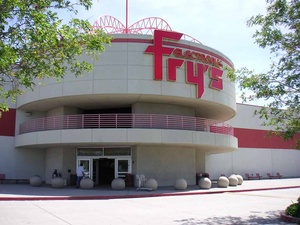 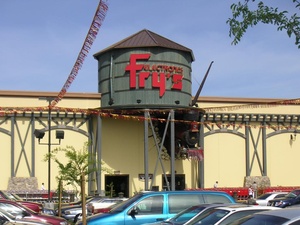 Fry's is an electronics retailer with many of its stores in California. Stores are large and generally have a decorative theme (except the Sacramento location, as it replaced an Incredible Universe store). The Sacramento Bee carries the popular 8-page Friday advertisement.

Interestingly, Fry's began as a chain of grocery stores in California and expanded to Arizona, before the company was sold to a different company. Those supermarkets have changed owners over the years. However, there are still Fry's Food stores open in Arizona but they are now operated by Kroger. When the founder of Fry's sold his supermarkets, he gave a cut of the money to his sons. The sons started Fry's Electronics and opened their first store thirty years after the first Fry's Food was opened. To this day the Fry's Electronics logo still looks very similar to the original Fry's Food logo and they still use the Fry's Food slogan of "Your Best Buys Are Always At Fry's."