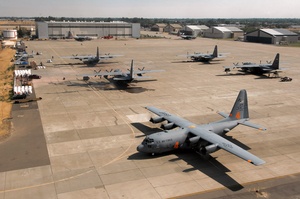 McClellan Air Force Base (1935–2001) is a former United States Air Force Base located in the North Highlands area of Sacramento County, 7 miles (11 km) northeast of Sacramento, California. For the vast majority of its operational lifetime, McClellan was a logistics and maintenance facility for a wide variety of military aircraft, equipment and supplies, primarily under the cognizance of the Air Force Logistics Command (AFLC) and later the Air Force Materiel Command (AFMC). The United States Coast Guard previously operated Coast Guard Air Station Sacramento at McClellan AFB as a tenant activity, operating and maintaining several HC-130 Hercules aircraft. CGAS Sacramento continues to operate at McClellan following its closure as an Air Force Base and is the only remaining military aviation unit and installation on the airfield.

The former McClellan Air Force Base is also the home of the Aerospace Museum of California. The museum itself was originally set up as the McClellan Aviation Museum in 1986 (before the McClellan AFB closed). It was chartered by the National Museum of the United States Air Force and in 2005 it changed its name to the California Aerospace Museum. Various military aircraft sit on display inside one of the hangars, and many more are outside on the tarmac. The museum has displays which highlight the mission of the base when it was active, as well as neighboring bases such as Beale AFB, Travis AFB and the since closed Mather AFB. The museum hosts educational programs to schools in the local area.