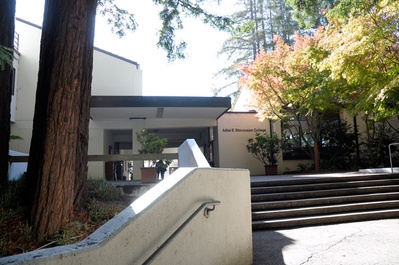 Stevenson College was UCSC's 2nd original college. It is located next to it's sister college, Cowell, with which it shares a dining hall. The current Provost of Stevenson College is Professor Alice Yang.

Stevenson features dorms and apartments, the latter of which are generally reserved for returning students.

Stevenson features 8 different residence halls, named according to number (1-4 are considered 'Upper quad' and 5-8 are considered 'lower quad'). Each quad has an on-site housing advisor, and each residence hall has two students who are designated 'Resident Assistants'. (At other colleges, 'resident assistants" go by a variety of different titles, but ultimately perform the same tasks.)

Each residence hall has:

2009-05-08 04:39:25   i was assigned to the one-bedroom apartment inside of house 4 for 08-09 and it SUCKED. i shared the bedroom (which was obviously meant to be a single) with another transfer student. the entire apartment is tiny, but we had the pay the same amount as stevenson students in the newer apartments that are MUCH bigger and nicer. both my roommate and i moved off-campus after the fall quarter. it was such a rip-off, and for some reason it was always like 15 degrees hotter inside the apartment than outside. they seriously need to redo the buildings. —kayla87