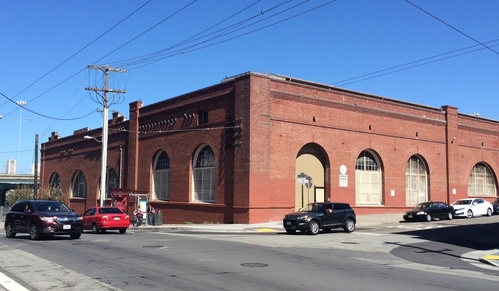 Note the rows of little holes on both sides of the corner column, which connected old lines to the building. September 2014, by Britta Gustafson (CC BY-SA)

The Bryant Street MUNI building at 1401 Bryant (at Division) was built in 1893 by the Market Street Railway as a powerhouse. It's now the Overhead Lines Facility for Muni, but it's seismically unsafe and outmoded - and very expensive to renovate - so Muni is moving those operations to another building and planning to eventually sell this one.

Former use by Market Street Railway 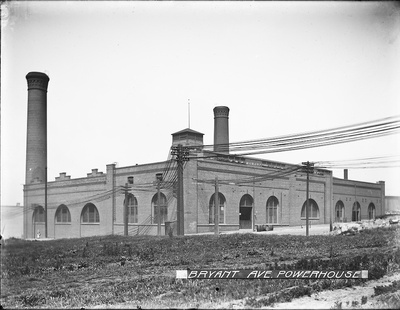 Check out those smokestacks! "Bryant and Division Street Powerhouse at 11th Street", circa January 1904, from the SFMTA Archive.

Back of the building; the sign says "Market Street Ry Co. General Store". "Panoramic of Bryant Street Substation and Storeroom", October 1928, from the SFMTA Archive.

The SFMTA Photography Department & Archive has lots of old photos of the building under the names "Bryant and Division Street Powerhouse" and "Bryant Street Substation".

Recent use by Muni 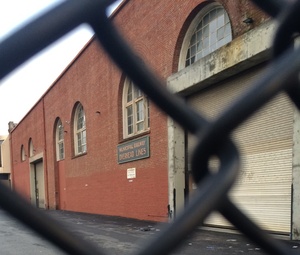 A Muni document says "At 1401 Bryant Street stands a 43,000-square-foot building, erected in 1893, where Muni’s Overhead Lines Maintenance operations has been housed since 1947. The building it is not in compliance with San Francisco’s Unreinforced Masonry Building Code, and the cost to seismically upgrade this facility is estimated at over $21 million. Thus, Muni will soon relocate this function to the Burke Avenue facility, discussed below. The City’s Real Estate Division will conduct an appraisal of the 1401 Bryant Street property for sale."

From another Muni document, explaining more about the current use, in the context of planning a move to a facility on Burke Avenue: "This division, which is currently located at an MTA-owned facility at 1401 Bryant Street, consists of a fleet of 18 vehicles, equipment storage and repair areas, offices and a locker area for staff."

And another says: "Although the area is undergoing revitalization as tech companies grow in the city, the cost of seismic rehabilitation makes this a poor candidate for private development."

In October 2014, an article about unreinforced brick buildings in the city included a bit about the building, including: "...some workers at 1401 Bryant St. were unfazed by the building’s state of health. “This building survived all the other earthquakes,” said one worker who declined to give his name because he wasn’t authorized to speak to the media. “It’s built better than most.”"

Potential future use by San Francisco Animal Care and Control

In May 2015, a $26.5 million project was in preliminary review for making it into a San Francisco Animal Care and Control facility: "as proposed, the interior of the building will be gutted and an all-new building will be constructed within the envelope of the exterior brick walls, with a new second floor and 5,000 square feet of open air dog runs for the proposed new tenant."