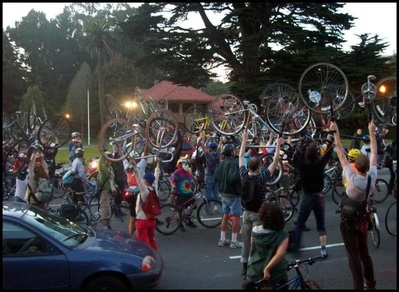 Critical Mass began on September 25, 1992 in San Francisco and has since spread to a large portion of the rest of the world.

While the reasons for the 'Mass vary, the general idea is that the bicyclists "take over" the roads from the automobiles for a few hours, creating corks in traffic and forcing those in running vehicles to allow the pollution-free commuters to control the roads. Critical Mass participants bike together through red lights and block off major lanes of traffic.

Critical Mass meets on 6pm last Friday of every month at Justin Herman Plaza (Market @ Embarcadero). The ride doesn't usually get started until around 6:20'ish, so if you're running late it's sometimes possible to slide into the mass. Lurking around SOMA looking for a big yelling group of bikes might be your best bet if it's already left

Critical Mass has no planners and is entirely spontaneous. Because the route isn't planned beforehand, destinations are decided on-the-fly by whatever group is in front, on an intersection by intersection basis. Rather than leading to increased variety, this lack of planning means the mass tends to follow the same tropes:

Ted White's We Are Traffic is a great documentary on the beginnings of Critical Mass in San Francisco.

In late 2009, some folks started an attractive SF Critical Mass Blog, in an effort to clear up public misconceptions and cool down the level of general dickishness in the event through education.

There's a Critical Mass Wikia out there as well that attempts to catalog all rides internationally. 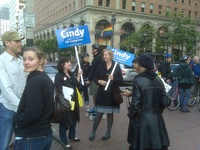