The Cal Poly Divest Fossil Fuels campaign is one of 210 college divestment campaigns across the country, tied to 350.org, a global grassroots movement to solve the climate crisis.

Climate change is linked to the carbon cycle. As the concentration of CO2 and other greenhouse gasses in the atmosphere increases, they trap heat and cause the global temperature to rise. To solve climate change, we have to get more carbon out of the atmosphere and into organic storage. 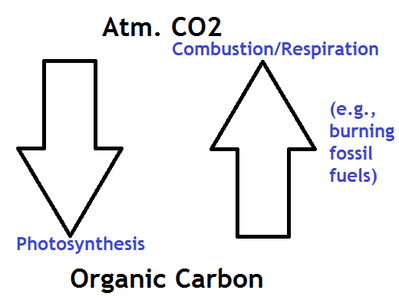 Here are 3 numbers to remember to understand the importance of the climate crisis:

The motivation behind the global divestment campaign is simple math: Fossil fuel corporations have 5 times more oil, coal, and gas in known reserves than climate scientists think is safe to burn. To keep earth livable, we need to keep 80% of their fossil fuels underground.

Fossil fuel companies are powerful. But the apartheid government in South Africa was powerful also. Throughout the 1960s, 70s, and 80s colleges, states, counties, cities, and countries all over the world pulled their investments from companies doing business in South Africa. By 1989 155 colleges, 26 states, 22 counties, and over 90 cities in just the U.S. alone had divested. The divestment campaign created economic and political pressure to help bring an end to apartheid decades before it was predicted to occur.

So yes, fossil fuel corporations are powerful, but so are we. They are using their power and money to tie up Congress from passing climate change legislation while glaciers melt, sea levels rise, small islands relocate, Southeast Asia floods, East Africa experiences drought, NY experiences Hurricane Sandy, and on and on and on.

But we don’t need to wait for Congress. We don’t need to wait for others to take action. We can take action now – by taking responsibility of our money at Cal Poly. As Cal Poly students, faculty, and alumni, we have the right to decide how our $150 million endowment is invested. By signing the postcard in front of you, you are telling President Armstrong to stop buying new stock in fossil fuel companies, and to divest from fossil fuels completely in 5 years. You are telling President Armstrong you want to keep carbon in the ground, to keep our planet livable. 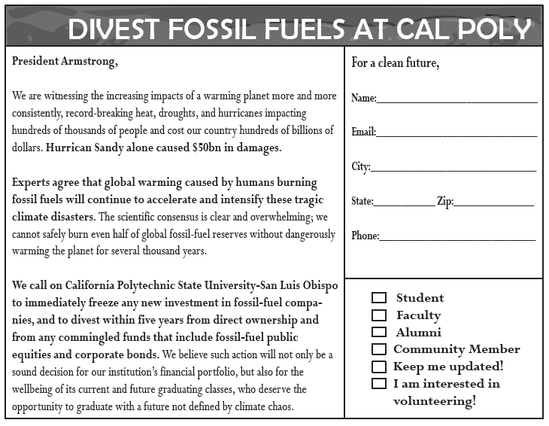 Print out and sign this postcard to tell  President Armstrong to divest fossil fuels.

Please return signed postcards to the SUSTAIN SLO office in the Kennedy Library, Room 408 at Cal Poly. Slide it under the door if no one is there.