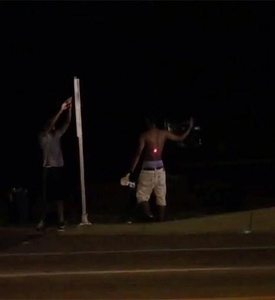 Laser sights from police rifles on a young man's back [source]Police are responding to the Ferguson protests with harsh crowd control measures.

Many have been criticizing the police response as over militaristic, part of a trend in Police Militarization. Police have been using heavy armored vehicles, heavy body armor, sniper rifles, and other high-powered equipment against the unarmed protesters.

Here is helmetcam video from St. Louis Post-Dispatch photojournalist David Carson who was embedded with a tactical team on Monday 2014-08-18. It shows officers firing teargas and activating an LRAD sound cannon.

Ray Downs identified a possible spec sheet for the rounds being used..

Police are using armored vehicles as portable barriers to try to control the stage of operations in the middle of suburban streets. This interactive panorama shows police positioned opposite a crowd of protesters in front of the QuickTrip.

One of the APCs in action may be a BEARCAT (Ballistic Engineered Armored Response Counter Attack Truck), a popular APC used by other police departments such as OPD in Oakland, CA. The St Louis County PD acquired a Bearcat in 2012. "The agency used homeland security grants to purchase the Bearcat for $360,000. The agency also equipped the vehicle with a plated platform that can be elevated 17 feet." 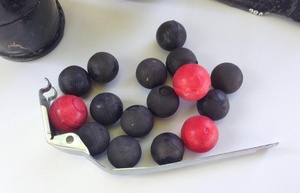 debris recovered from the scene of the protests (source) 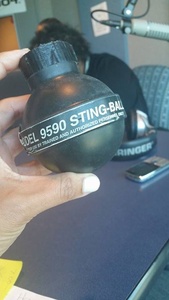 Here is an example of an injury reportedly from one of these rounds (warning: graphic) http://instagram.com/p/rqohIxoXhZ/

These are fired in clusters from grenades called sting balls

40 gram projectiles fired out of a 12 guage shotgun and potentially fatal, according to the spec sheet. Local NBC affiliate said a member of their photo crew was hit by one. Used cartridges were found on the ground.

Guns that fire bean bags are sometimes orange and say "Less Lethal" on them (while still looking like shotguns). Learn more about this type of gun. 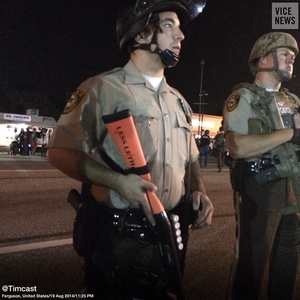 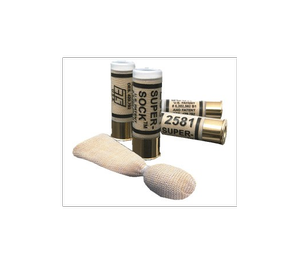 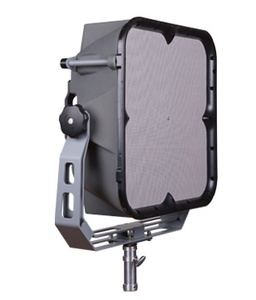 Police in Ferguson are using Long Range Acoustic Devices (LRAD) (6:44 on this video from a protestor livestreaming in Ferguson)

Slate identified the model being used in Ferguson as the LRAD 500X-RE, which has a range beyond 2,000 meters and can reach 149 decibels. Sound at 130 decibels can cause permanent hearing damage.

"Cops in #ferguson are quite literally rolling up to reporters and tear gassing them to keep reports from getting out." [source] 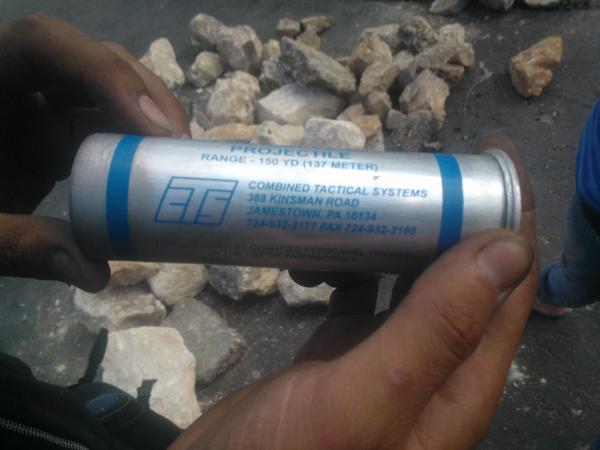 "CTS teargas canisters made in the USA are what are being shot at us." [source]

Police have been using tear gas and smoke bombs to disperse crowds and to keep reporters out (see: Media Blackout).

Tear gas canisters are launched by 6-round 40mm grenade launchers like this one. 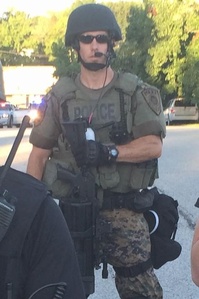 CS gas is being used. A cannister: http://instagram.com/p/rqvjlJCrhz

At 1:23 in this video you can see local police equipped with gas masks

Video by protesters where police approach and then the tear gas starts:

Wednesday evening, August 13, they fired tear gas at an Al Jazeera TV news crew setting up for a shoot https://www.youtube.com/watch?v=720_l3dgbYA (more pictures of this on the Media Blackout page).

The night of 8/18 protests (early morning of 8/19), police were driving through residential neighborhoods shooting tear gas (even when there were no protesters around). [@rdevro <= one of the arrested journalists]. Elon James captured video of this.

Han-Ball Grenades [spec sheet], manufactured by Defense Technology are being used by police. This grenade was found on the night of August 14, 2014. https://twitter.com/WesleyLowery/status/500537457780477954

Here's the main page about the No-Fly Zone.

The FAA issued the directive at the request of St. Louis County Policy and the stated reason was "TO PROVIDE A SAFE ENVIRONMENT FOR LAW ENFORCEMENT ACTIVITIES".

The police explained their request to the FAA by saying that a police helicopter had taken fire the night before. 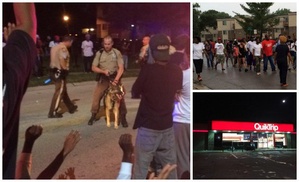 Police used German shepherds on protesters at least on Aug. 10 (can anyone confirm use of dogs on other days?).

Here's video of dogs being used on protesters (link):

Here's an article that includes that video and the above photograph.

During the protests on the evening of 8/18, police were turning out streetlights and using night vision [source]. In addition to making it difficult for protesters to see what was going on while letting police see unimpeded, darkness prevents video and photography.

It has become very common for police to point guns at people as an intimidation tactic to terrorize citizens, protesters, journalists, and observers into complying with police orders and preventing reasonable refusal of improper and unjustified police demands.

An officer from the St. Ann Police Department was relieved of duty after the Missouri ACLU wrote a letter to Missouri Highway Patrol Colonel Ron Replogle protesting his actions.