Bronte Gully is a natural gully which leads down to Bronte Park and Bronte Beach in Sydney's Eastern Suburbs.  Dumping of illegal waste, including chemicals, litter and weed infestion have been a problem in recent years though both Waverley Council and local residents have been proactive in trying to protect this beautiful gully. 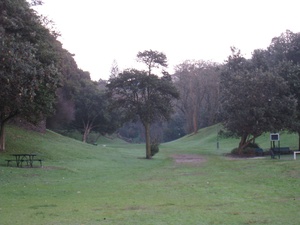 A childrens playground is located in the mouth of the gully.