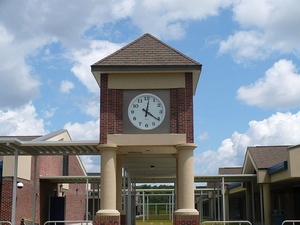 Conley School Clock Tower [Photo credit]The Conley School at Southwood is named for J. Michael "Mike" Conley.  Conley was born in Huntington, West Virginia in 1936 and later moved with his family to Orlando, FL. Conley quickly discovered his athletic ability and excelled in a variety of sports. In the 1950s he become an All-American on the Florida State University Track team, and he was later inducted into FSU's Athletic Hall of Fame. After graduating from Florida State University in the late 1950s, Conley began a career in education, first teaching American History at Cobb Middle School in Tallahassee, FL, then moving to Leon High School.

During his career at Leon High School, Conley served as coach and assistant principal before becoming the principal in 1973. Conley served as Principal of Leon High School until his retirement in 1989, while serving as Interim Principal at nearly every other high school in Tallahassee at one point or another. After his retirement from Leon High School, Conley ran for and was elected to the Leon County School Board in 1990. He served one term before retiring from public life. Conley is still very involved with the community and has served in advisory roles for the Leon County Public School system for many years. He and his wife Sue have three children, Susan, Cindy, and Jon.