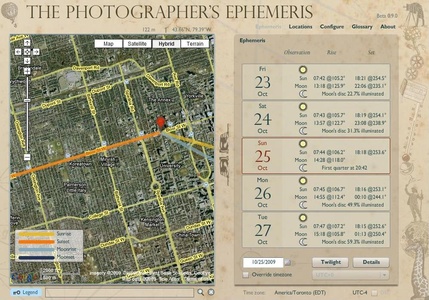 Experience "Manhattanhenge" in Toronto, screen capture of the sunset along Bloor Street on October 25th, 2009 @ 6:18 p.m. Screencap by Gavan Watson and re-posted by permission. 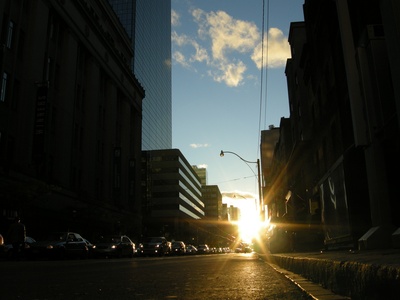 Torontohenge — October 15, 2008. Photo Copyright by Mike Hoyes and re-posted by permission. Thanks Mike!

Manhattanhenge Photo taken May 30, 2009 by blogborygmi. Some of you might be familiar with Manhattanhenge, the phenomena where the sunset is in line with the east-west streets in Manhattan. Much of Toronto's downtown core is on such a grid, although on a different angle, some people wonder if there is such a phenomena here in Toronto, our very own Torontohenge.

According to this PDF on The City of Toronto's planning webpage: "The Toronto street grid is generally rotated by sixteen degrees west of north." (p. 44).

This sunrise and sunset calculator includes an option to show the azimuth.

Checking there, it looks like in 2009, sunrise aligns with the grid on April 17 or 18, and August 23 or 24; and sunset on February 16 or 17, and October 23 or 24. ("N or N+1" in all cases since both the reference for the angle of the grid and the azimuth are only given to the nearest degree. More precision would be needed in those angles for the exact answer.)

Queen Street and King Street are good places to experience this phenomena take a photograph or few.