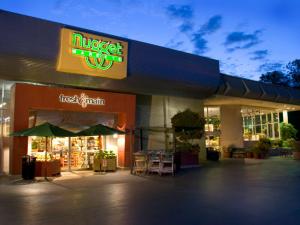 Nugget Market, headquartered in Woodland, is a somewhat-upscale local grocery chain with stores in Davis, Vacaville, West Sacramento, Sacramento, El Dorado Hills, Elk Grove, Roseville, and Woodland. The Woodland, Vallejo, and Cameron Park Food 4 Less stores are run by the same company. Nugget is a family-owned business and has been since 1926, when it was started in Woodland, California, by the Stille family. The Stilles still run the business today, which has expanded Nugget Market locations in the greater Sacramento area. Every associate at Nugget knows that company President Eric Stille and his father, Chairman of the Board Gene Stille, are still committed to the same principles that founders Mack and William were when they started the business: high-quality products and low prices.

Some are turned off by Nugget Market because it carries a larger selection of expensive gourmet foods compared to generic supermarkets, and thus lead some people to think that everything in the store must be expensive. While a Nugget Market may look nice and offer a large variety of gourmet foods, its diverse selection can still be cost-effective. According to a study done by Amie Gutierrez's high school class, Nugget Markets were often cheaper than Safeway or Albertsons.

In addition to groceries, Nugget Markets also have a full deli (where you can get the best sandwiches this side of the tracks), fresh juice bars, coffee bar, full service bakery, sushi, and some mediocre Chinese food. Nugget Markets also sell a variety of ethnic foods. Nugget has one of the most diverse sampling of gourmet root beers and sodas in town.

Word of advice: if you are very hungry, Nugget Markets may not be the place to go. EVERYTHING looks good no matter what the price is and you will be tempted to buy it.

StevenDaubert says that they can slice/toast/creamcheese your bagel for free, just head to the smoothie counter. If you are ever up around 6:30 AM go in for the piping hot fresh bagels!

2008-06-23 19:01:43   This store can be maddening. They don't have a 9 items or less aisle anymore (even though it sits there, languishing, the clerks never open it...probably management's idea to encourage shoppers to buy in larger quantities rather than shop for a few items at a time). I just can't stand the lines...I'd almost rather go to a conviencence store to buy my items. Also, their produce has to be the worst I've seen in yolo county...despite the "best of woodland" rating (which probably resulted from the cult-like nugget employees voting for the store themselves . I'll break ranks and say thumbs down to this store.

2008-09-20 02:05:46   I just love here! employees are the nicest I've ever met. Foods are great. Though the prices aren't cheap, I still care for fresh&tasty food there. Also, if you guys are into ethnic food, you definitely wanna go there. —jisun

2010-11-02 14:37:54   new chew I have no idea what your speaking of, I love the store, the lines are never long and the produce is wonderful! And if you ever can't find something just ask for it and they'll get it, no questions asked! —joeschmoe