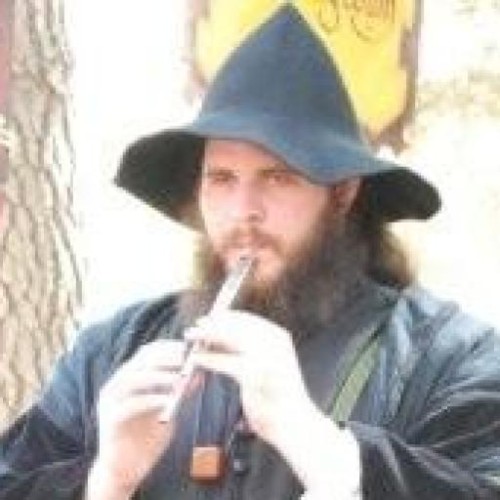 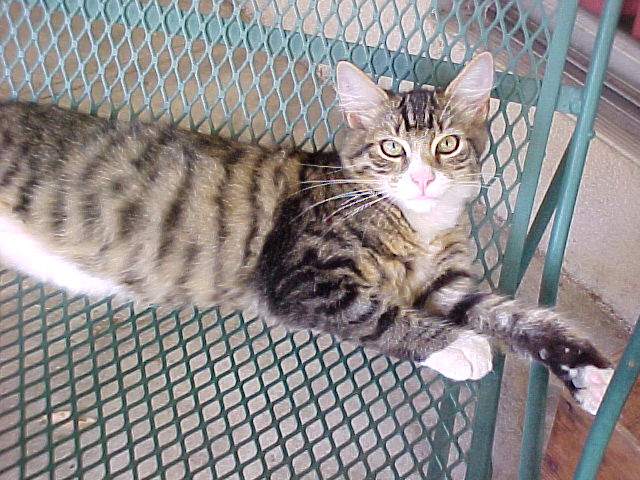 Barnabas Truman started life as a harmless-looking little kitty-cat. My, how he's grown since then! 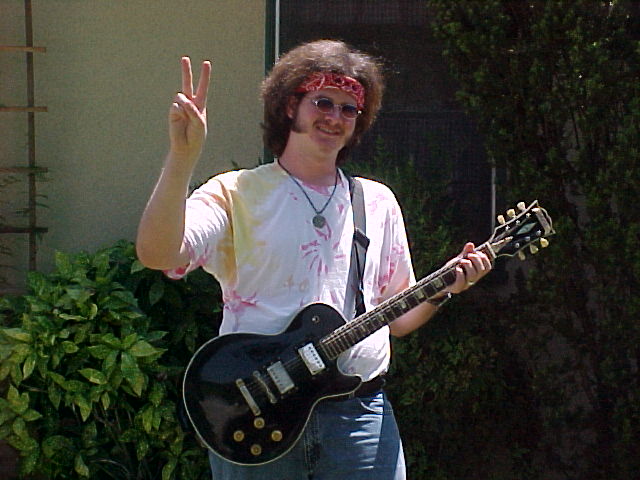 Okay, so he went through a rather awkward phase during the 1970s. Didn't we all? And don't you wish you hadn't seen this? That's what I thought. Move along now. 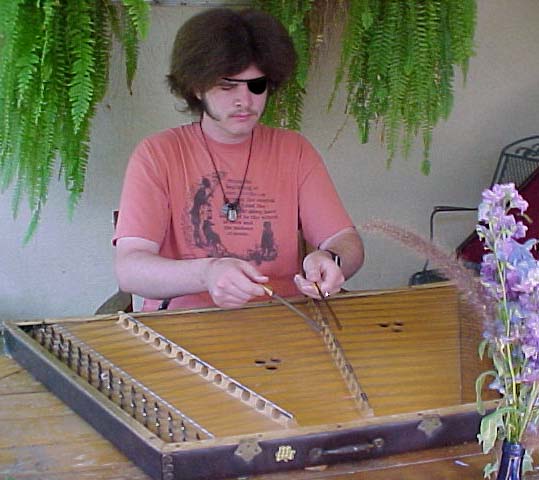 In the summer of 1600, Truman was working as a bounty hunter and trying to hunt down his cousin, the notorious pirate captain Mad Morgan Burnsides. After a long and glorious battle, Truman was beginning to gain the upper hand, but a fateful accident (apparently involving an accordion, a scimitar, and three bottles of fine Jamaican rum; he doesn't like to talk about it much) caused him to lose his beard, his honor, and his left eye, and the brave Truman was forced to retreat. While recuperating from his injuries he learned to play Irish music on the hammer dulcimer (already being quite skilled on the pennywhistle and bodhrán). 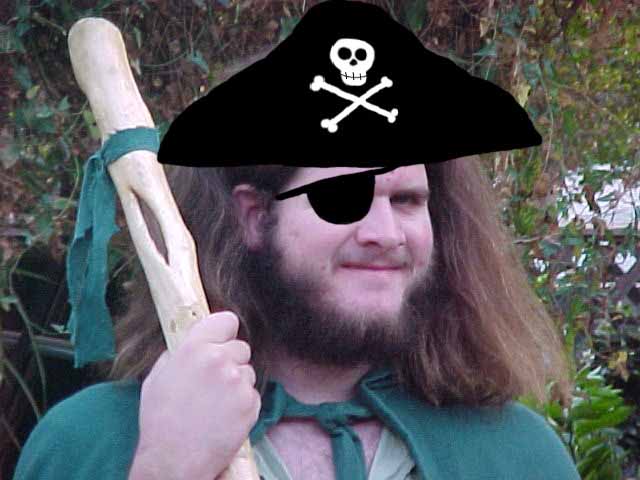 As soon as his beard grew back in, Truman donned his green war-cloak and picked up his mighty staff, and, invoking the powers of the mighty surfer god Saint Christopher, walked boldly across the waters of the ocean, once again seeking the dastardly pirate Burnsides. This time he won the battle, regained his honor, and took Burnsides's awesome pirate hat as spoils of his victory. Tragically, it was not until Truman triumphantly returned home that he realized to his horror that he had been wearing the eyepatch on the wrong side the whole time. 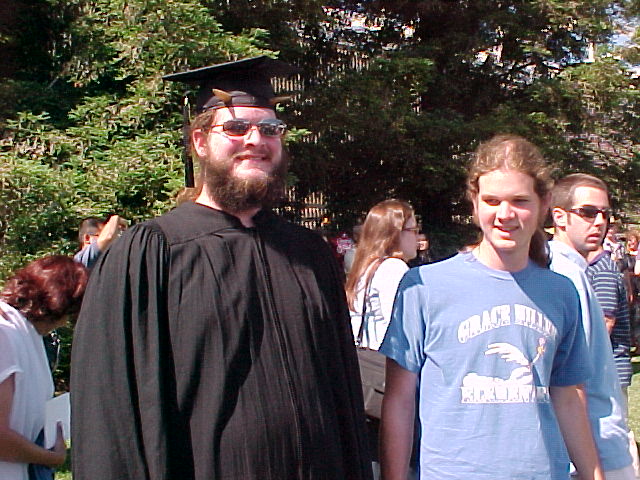 At some point in history, Barnabas found the time to earn a bachelor's degree in mathematicks, with a minor in philosophy. This picture proves it! See? Also, he has horns. Sometimes. They're retractable. 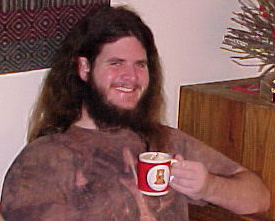 He now lives under the bridge between Olson and Shields Library, as a friendly ogre. Any rumors that he eats a freshman each year are slanderous, and any resemblance to a certain half-giant wizard school dropout is strictly coincidental (he had the beard way before Robbie Coltraine made it popular!).

Truman works as a TA for the math department and an observer/judicator for the Ancient Order of Walkers. He spends most of his spare time playing awexome Irish folk music, getting very close to ascending in NetHack, thinking about mathematicks, thinking about his lady fair, thinking about Renaissance Faires, arguing about philosophy/religion/politics/whatever strikes his fancy, watching silly Flash cartoons, reading silly web comics and sillier fantasy novels, and telling ridiculous stories like the one you have just read. He has also taken up, as a hobby, the study of the Campus Crusade for Chaos and Confusion and its history and philosophy. He does not have a grappling hook, but he does have a really cool walking-staff. (Sorry, ladies, Mr. Truman is no longer single.)

2006-01-11 12:00:56   Hi, I'm writing an article for the California Aggie on the Jagged Tree. You had some really nice things to say about it and I was wondering if I could interview you. If you are interested, my email is [email protected] -Carly —LizethCazares

2006-02-09 2:41:00   There where four of us. Everything fell apart. I’m sorry. I found out I’m Manic-depressive. It explains some things. I still feel embarrassed. I want to come to terms with Matt’s death. Could you tell me if there is a place dedicated to remembering him? Also, On one hand I’m trying to make more since of C4, MBS, and exponential distributions. On the other, I’m looking for some one who knows how to play Go. Could you help me with any of this?

2006-05-27 21:22:10   You look a lot like my geometry TA from last quarter, who was a very demanding grader on the journals, but added a lot of insight through his frequent comments, increasing my learning experience. i still cant figure out how you folded the corner of that page so it wasnt straight :) —MattHh

2006-07-14 13:27:46   Hey Barnabas! I'm from the Pacifico co-op, and I'm working under the new management (nasco) to change things around here. I read your comment on the Pacifico wiki page, and I was just wondering if you would be open to changing or removing the comment (and maybe also elaborating on your experience to me via email—I really want to hear about experiences and ideas to make it better). I really appreciate the comment and definitely want people to have an honest perspective of the place, but I was hoping you might be on our side in trying to start fresh. We're having a tough time getting people in here, a lot because there's a bad impression out there. But I think there's a lot of potential. My email is [email protected], I really hope to hear from you! —AliceWhite

2006-07-28 07:46:46   The reason we don't have html tags is because we are nazis who believe in the superiority of our markup language (Heil!) that is more user friendly, and moreover is master (Heil!). It also lets the site look more coherent than myspace. —NickSchmalenberger

2006-11-06 18:20:46   Math 23? Well, not officially; it was more of a Discordian joke. Note the professor listed on the course website. I do offer cheap tutoring in numerology for interested parties though. —BarnabasTruman

2007-03-08 00:58:12   hi Barnabas, I am writing an article about beards for my journalism class and would very much like to speak with you. If you will, would you please contact me at [email protected] ASAP? I would appreciate it very much! —EliseKane

2012-05-01   Hey, look, a spotting in the wild! I love how the entire basis of this article is, "Look, some dude wears a CAPE! Around school! Like, every day, even!" —JenniferRutherford