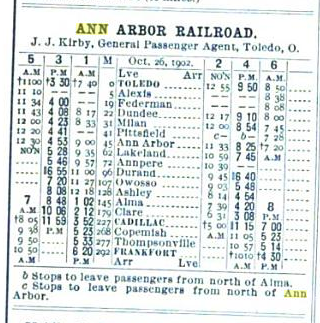 The Michigan Central Railroad began serving Ann Arbor in 1839;  but in 1878 James Ashley brought competition to local rail service by inaugurating the Toledo and Ann Arbor Railroad. In gratitude, the city renamed the former Second Street as Ashley Street. Through a convoluted history of expansion and re-namings this entity ultimately became the Ann Arbor Railroad, with track connecting Toledo to the rail-ferry docks of Elberta, Michigan, and thus to Wisconsin and beyond. Today's Ann Arbor Railroad is the southernmost remnant of this line, with ownership of the tracks ending at a siding just north of town.

An Ann Arbor Railroad caboose has been restored by the Railroad Historical Society of Northwest Michigan and is on tracks in Traverse City. Grand Traverse Herald News story.

The Ann Arbor Railroad Technical and Historical Association has a detailed collection online, and has deposited partial archives of the company at the Clarke Historical Library at Central Michigan University.