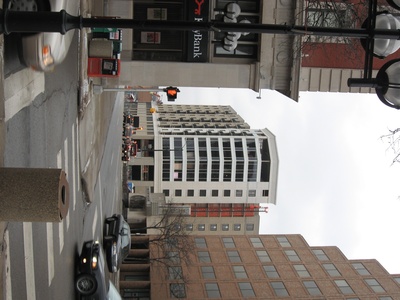 as seen from the corner of Main

Ashley Terrace is a development project nearing completion as of late 2007, at the northwest corner of Huron Street and Ashley Street in downtown Ann Arbor. Constructed by Freed on the site of the Whiffletree, a much-beloved restaurant that burned in 1988, and the Kleinschmidt Insurance Building, an unassuming block building torn down for this project. The building is 10 stories tall, and included 99 condo lofts, ground floor storefronts, and underground parking. As of October 2007, 60 of the condos had been sold; Flagstar Bank serves as the ground-floor "anchor" tenant.

Like most Ann Arbor development projects, Ashley Terrace was the source of some contention during the 2005 review process. While some opposition was the standard "why do we need to build anything?" protest that meets most Ann Arbor construction, the residents of One North Main's upper stories complained that the building would block views from their windows, reducing the values of their own condos by as much as $250,000 each.

Several pictures of the construction process are available on Flickr: http://flickr.com/search/?w=all&q=%22ashley+terrace%22+%22ann+arbor%22&m=text