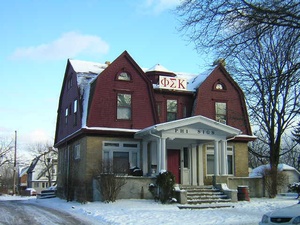 The Bert and Edna Peet house at 128 N. Normal Street in Ypsilanti, constructed in 1907.

Professor Bert W. Peet (March 16, 1871 - 1967) was an Eastern Michigan University chemistry professor, prominent Ypsilantian, and crusader for food purity. Born in Chesaning, MI, to a pioneer sawyer, he earned a degree from Michigan State University in 1892. After a five-year stint teaching botany, zoology, and chemistry in the Grand Rapids schools, he spent one year studying medicine at the University of Michigan before earning a masters degree in chemistry in 1899 and taking a job as a chemistry professor at Eastern (then called Michigan Normal School); he was made chair of the chemistry department in 1916. After retiring from EMU in 1941, he served as control chemist at the Willow Run bomber plant for three years.

In 1902, he married Edna Hope Barr of Battle Creek, a "critic teacher" at the Normal School. In 1907, the couple built a house at 128 N. Normal Street, now the home of EMU's chapter of Phi Sigma Kappa.

In addition to state-wide activism around food purity and safety, Peet was active in the Ypsilanti community. He was a life elder of Ypsilanti's First Presbyterian Church, a charter member of the Forum Club in 1912, and a member of the Kiwanis Club beginning in 1929.