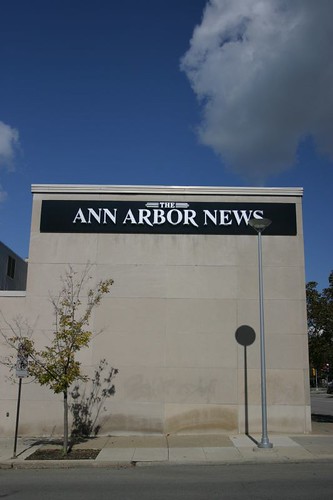 Former Ann Arbor News building, photo Nickolay Khazanov.The Ann Arbor News is published in print on Thursdays and Sundays and is available online on MLive. The current incarnation was created in 2013, after a rebranding of the short-lived AnnArbor.com.

On January 6, 2016, reports circulated of pending layoffs to journalists at the Ann Arbor News and to MLive reporters statewide. An MLive news release reports that 29 content positions will be eliminated statewide, with no details of any local impacts.

In 2013, AnnArbor.com was transitioned over to the MLive platform (along with Advance's other Michigan newspapers) and was replaced by a revived Ann Arbor News.

In November 2008, the News announced that it was consolidating operations with the rest of the papers in the Booth chain around the state. Buyouts were offered, and some functions were centralized.

On Mar 23, 2009, the Ann Arbor News announced that it would cease operations in July 2009. It was replaced by AnnArbor.com.

The newspaper was published daily and Sunday and like the current incarnation was available online at MLive. It was in the same family of newspapers as the Booth Newspapers, a chain of Michigan newspapers in turn owned by Advance Publications, a Newhouse family company.

The closing of the Ann Arbor News would be the first in a series of changes at Advance that would see daily newspapers converted to twice or three times weekly papers, with greater emphasis put on online news coverage and online advertising.

Op-Ed: Other Voices essays Letters to the Editor

The News has a blog, Latest from the Ann Arbor News, which updates throughout the day with breaking news. There is a bootleg rebroadcast of this blog through Twitter at a2snooze. A daily webcast is shot in the downtown Ann Arbor newsroom on the third floor of the historic Albert Kahn building at Huron and Division.

The News is sometimes referred to as the "Snooze."

Some observers feel the News has a tendency to overplay "scandal" stories related to the University of Michigan.

1900 -- Ann Arbor Daily Argus and Washtenaw Times collaborate -- one a morning paper, the other an evening paper.