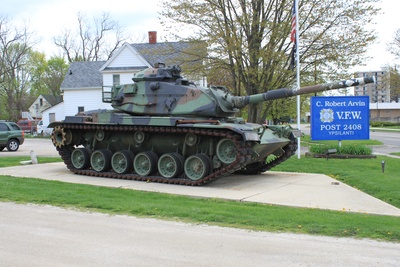 Photo: Dwight Burdette, Wikimedia CommonsThe Ypsilanti VFW is located at 616 West Michigan Avenue in Ypsilanti. It is named after C. Robert Arvin, a native of Ypsilanti who was killed in action during the Vietnam War.

There is a tank out front; you can't miss it.

The C. Robert Arvin Veterans of Foreign Wars Post 2408 in Ypsilanti is named for a town hero who died young. The tank out front may be one of Ypsilanti’s most recognizable landmarks, a symbol of American strength and ingenuity. But today, Post 2408 has fallen into debt and disrepair. Its future is uncertain, and its membership has declined. If things don't change, the post will close. “We’re just trying to survive,” said Christian Tramp, 50, the post commander.

Facing a $15,000 debt and the threat of having its charter revoked, Arvin Post officers are seeking help from the very community it has helped shape through local programs and by continuing to honor the legacy of a local hero.