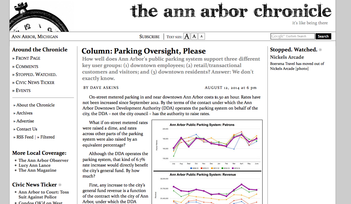 Screenshot of the Ann Arbor Chronicle site, August 2014.The Ann Arbor Chronicle was launched in September 2008 by Dave Askins (aka Homeless Dave) and Mary Morgan. It provides coverage of local issues, with a focus of in-depth reporting on local meetings, even meetings that failed to reach a quorum. It's not unusual for Ann Arbor City Council meeting accounts to weigh in at 10,000 words or more.

The publication is web-only. Askins and Morgan are supporting the publication with paid display advertising and voluntary subscriptions.

In 2013, the Chronicle announced that it was reluctantly suspending coverage of Ann Arbor Public Schools board meetings and University of Michigan Regents board meetings.

On Aug. 7, 2014 The Chronicle announced that it was ending publication of its regular reports as of Sept. 2, making its run on the local media scene exactly six years.

Many people here are talking about The Ann Arbor Chronicle, a new online venture started in September 2008 by a former staffer from The Ann Arbor News. The site is not a blog but a hyper-local website that acts like an online newspaper, complete with a daily “front page” that looks at everything from local meetings to the city budget.

It’s one of the oddest local-news startups in the country, and one of the most idealistic.