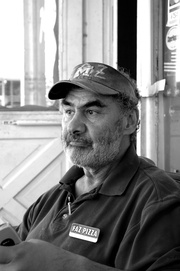 Faz was known by thousands for his generosity. He donated or sold countless reduced-cost pizzas to local organizations for fundraisers and meetings and had a penchant for meeting celebrities. He often donated pizza to the local middle schools when they had parties or dances, and many students at Community High School would order pizzas from him and re-sell them as a fundraiser.

Husain immigrated to the United States at the age of 14, settling in Ypsilanti, and owned his first pizza shop at the age of 17. After 25 years in Ypsi, Faz relocated his store to Ann Arbor.

In 1979, Husain was elected to the Ypsilanti City Council, becoming the first Muslim and the first native of India to win elected office in Michigan, and one of the first in the nation. He was also a candidate for mayor in 1993, a delegate to the Democratic National Convention in 1984, and traveled to India with President Bill Clinton on a trade mission in 2000.

The Communicator has a biography of Faz