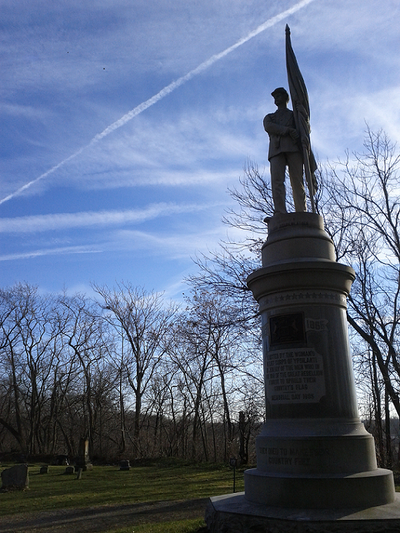 Located off of Clark Road near River Street at the northern end of Ypsilanti, Highland Cemetery lives up to its name - standing on the bluff overlooking the Huron River allows you to look down upon the Ypsilanti Water Tower and other Ypsi landmarks.

Highland was designed by Colonel James Lewis Glen, who also designed Forest Hill Cemetery in Ann Arbor, and was dedicated on July 14, 1864. It is at least the third cemetery in Ypsi, and many of the older graves were moved from a cemetery at what is now Prospect Park. The first burial was the body of Elias Norton, which was buried a day before the dedication.

In addition to 150 years of headstone styles, bearing the names of prominent families from throughout the area's history, Highland features a number of impressive monuments, including the Starkweather Memorial Chapel, Flowers Mausoleum, Quirk Mausoleum, Soldiers Monument, and a monument to unknown soldiers.

Washtenaw County historic marker YC 27 sits at the entrance to the cemetery: 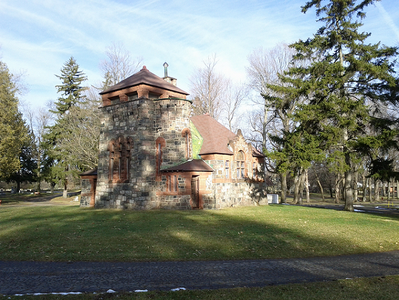 The Starkweather Chapel sits at the center of the cemetery.

Highland Cemetery is typical of the "rural tradition" cemetery design which emphasizes its natural setting. This design originated in France and was first seen in Greenwood Cemetery in New York. Highland Cemetery, as well as Forest Hill in Ann Arbor, was designed by James Glen, a landscape architect from Niles, Michigan.

The oldest gravesite is that of Walter Oatman. His body and dozens of others were moved to Highland Cemetery from Pioneer and Prospect cemeteries.