Both Ann Arbor and Ypsilanti are within the Huron River watershed; additionally, the river supplies most of the Ann Arbor's municipal water supply. The river runs through the area on its way from its headwaters, to the north in Oakland and Livingston Counties, to Lake Erie. Designated a Country Scenic Natural River, the Huron is a popular site for canoeing and other recreations, with numerous parks along its length - within the City of Ann Arbor, there is a greenway of parks and trails running along the length of the river. The river's lower portion has long suffered contamination from industrial facilities in and around Ann Arbor and Ypsilanti; the upper sections have more recently been strained by stormwater runoff from the rapid development of farmland and natural areas. 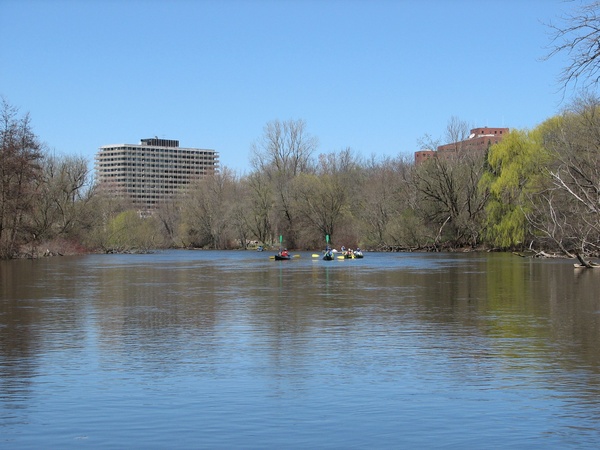 Tributaries of the Huron River

Several creeks feed the Huron within Ann Arbor, including,

To the west of Ann Arbor, more creeks fill the river:

Dams on the Huron River

Parks along the Huron River

The Huron River runs through Ypsi from the northwest to Ford Lake in the south, dividing the EMU campus and Downtown Ypsilanti, on the west side, from Depot Town on the east side. The riverfront is largely made up of parks, including Riverside Park and Frog Island Park, and current or former industrial facilities. The Huron also serves as an formal border within the city of Ypsilanti: areas west of the city exist in the 48197 zip code, with areas east being covered under the 48198 code. Similarly, the river is the official marker that separates the eastern lengths of streets from the west (i/e: E. Forest & W. Forest).

Many of the industrial sites along or near the River in Ann Arbor and Ypsi are being redeveloped, though work is often impeded by past soil contamination, and some of these projects have been criticized for their insensitivity to historic structures or perceptions of fiscal mismanagement. The destruction of the Peninsular Paper factory for apartments and the Water Street Redevelopment Project, in Ypsilanti, and the Broadway Village project in Ann Arbor's Lower Town are examples of controversial redevelopments along the river

The Washtenaw County Border to Border Trail project aims to create a biking and walking path along the River for its entire length through the County, connecting Ypsi, Ann Arbor, Dexter, the Hudson Mills Metropark, and other attractions. Several segments of this trail system already exist, including the entire length within the City of Ann Arbor, and most of the segements in the City of Ypsilanti and between the two cities.

Flooding in the Huron River Basin

When early spring melts, heavy rains, or other unusual weather occurs, portions of the Huron River basin are subject to flooding.

In the Hamburg Township area, flooding on Ore Lake and Little Ore Lake happened in June 2004; again in September 2008 after Hurricane Ike; and again in March 2009 after an early thaw.

After Hurricane Ike in 2008, Millers Creek contributed to water on Geddes Road near the Huron River.

Fleming Creek spreads out into its floodplain in Parker Mill County Park annually; a boardwalk there makes for easy viewing of that area.

Riverside Park in Ypsilanti will be submerged if the water is high enough.

The June 21, 1968 flood wiped out the Dixboro Dam, and caused damage to the Argo Dam and the Superior Dam.

A 1904 flood caused damage in Ypsilanti.

A table of Huron River water levels is a handy index to real time information.

Some storm drains in Ann Arbor are improperly connected to sewer drains, leading to basement flooding.

Bridge over the River Huron

The Huron is crossed by bridges that carry highway, road, railroad, foot, and bicycle traffic. Notable among these bridges are the tridge in Ypsilanti and the East Delhi Road Bridge.

The Huron River in Hamburg Township climbed to 7.25 feet Wednesday afternoon, prompting residents around Ore Lake to use some of the sandbags that were filled in their neighborhood earlier that day.