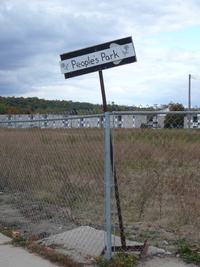 Lower Town is the area just north of the Broadway Bridge. A large section of the neighborhood has been vacant since 2005 and was slated for redevelopment in 2007. In mid-2009, an enterprising neighbor labeled the fenced-off brownfield "People's Park." By 2017, a proposal had come forward as 1140 Broadway Street.

Lower Town was one of the first-settled neighborhoods of Ann Arbor. Originally a separate village (becoming incorporated into Ann Arbor in 1867), it contains some of the oldest structures in Ann Arbor, including the Anson Brown Building, which dates to 1832, and currently houses the Saint Vincent DePaul Store. Mills and other industrial buildings located in the areas around the river and railroads, and the area has long been one of the city's more working class neighborhoods.

Lower Town has not fared well over the recent decades - the University of Michigan in particular has razed large portions of the neighborhood for its buildings and for parking. In mid-2013, the University began construction on a parking structure on Wall Street that will hold 725 cars to serve the Medical Campus. A large portion of the commercial area was redeveloped in a suburban strip style, with attendant large parking lots; Kroger had a store here that closed about two years after its Plymouth Road location opened; the Lower Town building was briefly an Arbor Drugs store and then a CVS location, but stood empty for several years before it was demolished in 2008. Currently, the only evening uses in the area are the Broadway Party Store and a delivery oriented Cottage Inn Pizza location, giving Lower Town a desolate feel after the evening commuter rush from the Medical Campus. 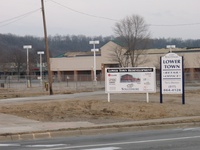 Sign announcing the redevelopment of Lower Town on the old Krogers site.

The University's parking structures aside, there were some plans for new construction and re-use of existing structures in the area. The Strathmore Company's Broadway Village proposal, which would have replaced most of the strip development with a mixed-use, pedestrian-oriented area, included seven two- to six-story buildings, a plaza, replanting the Traver Creek edge, and the remediation of soil contamination from an old laundromat with dry cleaning machines. This plan lost its funding, due to inability to solidify its financial backing. In Spring 2009 the entire area was graded and hydroseeded with a wildflower mix. Signs were removed, and the gates were opened. In mid-September 2009, a notice appeared at the Broadway St. boundary of the plot, tacked to a stake and addressed to one of the apparent owners, indicating that property taxes owed to Washtenaw County in the amount of approximately $4,500 were delinquent, and that the county would soon begin judicial foreclosure proceedings to take control of the property. The taxes were subsequently paid by the State of Michigan Retirement System, which invested $20 million in Broadway Village and took ownership of the site. 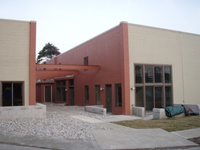 Some smaller projects are in the works as well: the old Suzuki Tech Center building, on Pontiac Trail behind the party store, was purchased in early 2005, and converted into lofts in 2006 (see photo).

The area just north of the University of Michigan Hospital contains apartment and condominium complexes. Apartment complexes include Island Drive and Medical Center Court. Condominiums complexes include Nielsen Square and Riverside Park Place. Single family homes mixed with rental units line Broadway and Jones in comfortable solidarity. Children play along the tree-lined streets. Cats cross at the street humps, as do squirrels and the occasional deer herd. The small houses are surrounded by pleasant gardens and mature trees, making this hillside one of the most picturesque in the city. Houses here were built between the 1830s and 2006, with many examples of mid-19th century architecture remaining intact.