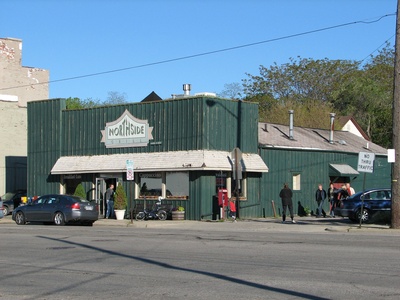 The Northside Grill serves a hearty breakfast and lunch to diners from its Broadway Street location near the Broadway Bridge in Lower Town. It often has lines stretching down the block for weekend breakfasts. Jim Koli is the owner since 1993.

The Northside was runner up to the Fleetwood Diner in Current Magazine's 2006 Best of Washtenaw County for Best Diner.

Expect to spend $8-$11 for breakfast, and about the same for lunch (before dessert, which is super recommended anyways).

Things to do while waiting:

Your entree is free on your birthday, though you need to pay for drinks, dessert and tip. Excludes takeouts.

The building used to house the Cloverleaf Dairy.