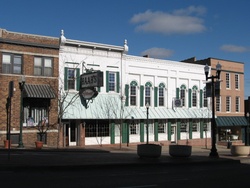 Haab's opened in 1934, when Michigan Ave was the main Detroit to Chicago road; nowadays, diners are more likely to have made the trip specifically for Haab's, rather than just stopping on the way. Haab's menu is classic Americana: London Broil, Chicken in the Rough, spaghetti with meatballs, meat loaf, sauteed chicken livers - and Sander's hot fudge featured prominently on the dessert menu.

Every year, on the third Monday in October, Haab's celebrates their anniversary by serving items from the original menu at the original prices (barbecue beef sandwich with fries for 20 cents), with the queue of devoted patrons stretching out the door and down the block. Much of the decor predates even the anniversary menu, with the pressed-tin ceiling and mahogany bar dating from 1906; the ceiling fans are driven by a system of belts powered by a single motor.

The Haab's Friday evening happy hour, 5-7pm, is popular for the menu of $2 drinks and appetizers, as well as for the rather creative administration of the ending time.

Every family diner should dream of growing up to be like Haab’s; to have a menu that fits on a placemat, a waitstaff that cares like mom, and enough batter and fry to make anything taste good. This is the kind of place that keeps "family restaurant" from being dirty words. Heavy wooden furniture, "pewter" bowls, and the exposed beams, all give the impression of being at a stagecoach stop. (Turns out, the beams are not load bearing, but were part of a renovation to the building after it became Haab’s in 1934.)

For an entree, the Chicken in a Basket, (a house specialty), is the top choice. Although I have not sampled very many dishes, Haab's is one of the few places I continue to order the same meal. It is extremely tasty, a golden fried half or whole chicken in a light, crispy batter served with very fine shoestring potatoes and a biscuit. The chicken arrives hot and freshly made, and is an ode to Grandma's fried chicken of many childhoods. The expert frying leads to a great texture, with an underlying moist, well-seasoned, wonderful chicken piece. The shoestring fries are easy to eat by the handful and are also immediately salted once being pulled from the fryer, which makes for a stellar end product. Throw the biscuit through the front window. (Michael L)

Now known as “Chicken in the Basket,” it’s probably truer to “Chicken in the Rough” than anything that still bears that name. For my chicken-loving-dollars, the chicken is best thing on Haab’s menu, although I do miss the cigar smoking chicken that once decked the walls. (OEC)