Jennifer Fike is a financial manager for local nonprofits and a member of the Ann Arbor greenbelt advisory commission (GAC). 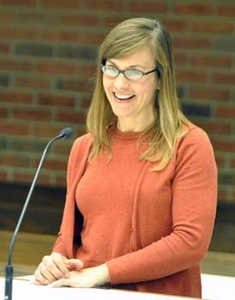 Jennifer Fike at an April 2013 meeting of the Ann Arbor greenbelt advisory commission. (Photo courtesy of The Ann Arbor Chronicle.)

She was appointed by the city council in June 2013 for a term from July 1, 2013 through June 30, 2016. She replaced Laura Rubin, a long-time GAC member who was term limited. Like Rubin, Fike holds a position designated for a representative from an environmental/conservation organization.

Fike is also a trustee of the Legacy Land Conservancy, and previously served on the board of Washtenaw Literacy. She served for two years (2010-2012) on the Michigan Agriculture and Rural Development Commission. Previous experience includes work with the Ann Arbor Summer Festival, the Center for Empowerment & Economic Development, the city of Ann Arbor, Saint Joseph Mercy Health System, and Zingerman's Deli.

Fike holds a bachelors of business administration degree from the University of Michigan.

Fike is married to Jon Cioffi, a management consultant and market researcher. The couple lives on Ann Arbor's near northeast side, in Ward 1 (the Traver Creekshed).