Joe (Joseph Edward) O'Neal is a local builder and owner of O'Neal Construction Inc., which was founded in 1961 and is headquartered in the Argus Building on Ann Arbor's Old West Side – a building owned by O'Neal. 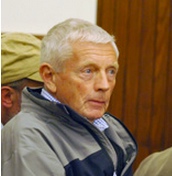 Joe O'Neal at an October 2010 meeting of the Ann Arbor park advisory commission. (Photo courtesy of The Ann Arbor Chronicle.)

O'Neal is active in conservation work, and was founding board president of the Allen Creek Greenway Conservancy, a 501(c)(3) nonprofit. He's also on the advisory board for the Community Music School of Ann Arbor (formerly the Ann Arbor School for the Performing Arts). He served on the Ann Arbor Downtown Development Authority board from October 1988 to July 1991.

O'Neal earned bachelors and masters degrees in civil engineering at Ohio State University, and holds a law degree from the University of Michigan.

He's been married to Karen Koykka O'Neal since 1963. They have three children – Heidi, Heather and Andrew.