Jud (Judson) Branam is interim executive director of the nonprofit Think Local First, a job he's held since May 2014. He had previously served as a TLF board member. 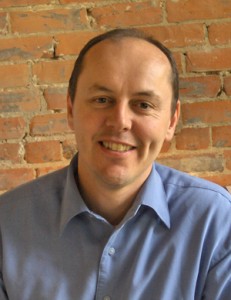 Branam runs a digital strategy consulting firm, Ink by the Barrel New Media, which he founded in 2012. It focuses on nonprofit and cause marketing. He serves on the board of directors of Creative Many Michigan (formerly ArtServe Michigan), a nonprofit that supports the arts.

Branam was senior digital strategist for Weber Shandwick from 2010 to 2012, and worked for MS&L Digital from 1998 to 2010, serving as managing director. From 1996-198 he was editor/online commerce director for InterZine Productions, a business that developed interactive multimedia content for America Online (AOL) and other platforms.

Branam began his career as a journalist, working for the Ypsilanti Press from 1987 to 1989 and for the Ann Arbor News from 1989 to 1996. He graduated from Michigan State University with a bachelors degree in journalism.

Branam also is the lead singer in the Ann Arbor roots-rock band Corndaddy. He is married to Patty Branam, a seamstress and freelance costume designer. They live in the Water Hill neighborhood.

Local Americana band Corndaddy makes it to the big time with first headlining show at The Ark – AnnArbor.com, Aug. 13, 2013