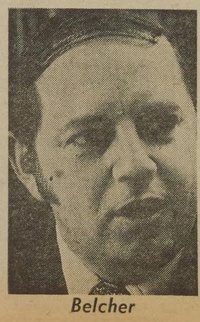 Michigan Daily photo, 1977Louis D. Belcher (b. 1939) served as a Republican in the office of Mayor of Ann Arbor, Michigan from April 1978 to April 1985. He was elected as Mayor in an unusual "special election" of 1978, held after lengthy court wranglings over the disputed 1977 mayoral contest, and went on to win three more two-year terms as mayor. Belcher also served as a Republican on the Ann Arbor City Council, representing Ward 5 from April 1974 to April 1978.

The Bentley Historical Library has the papers of Louis Belcher. From the finding aid to that collection:

The largest subseries within Official Communications is that of Correspondence and Memos. Particularly noteworthy are Belcher's letters aiding the recruitment of University of Michigan basketball players and the Complaints folders. The range of the complaints is broad and includes poor hiring practices in city hall, juvenile delinquents in Gallup Park, and parking tickets. (Parking tickets seem to be the bane of the city administration's existence, and such letters will also be found in the General correspondence subseries in this series, the Transportation Department subseries of the City Government series, and the Ann Arbor Summer Festival series of the Topical File.)