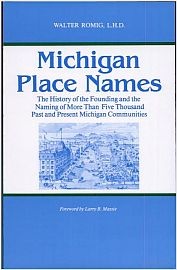 A source book by Walter Romig composed of information on the origin of the names of almost every known Michigan settlement, both thriving and defunct. When the second (and only widely available) edition is used as a source for ArborWiki, it is abbreviated and enclosed in parentheses as (MPN1986).

The book serves as a compendium of other, less easily accessed sources, including federal and Post Office records of the 19th century. A version is searchable on Google Books, and though you can't get at all of the full text this way, it does provide enough to answer many questions.