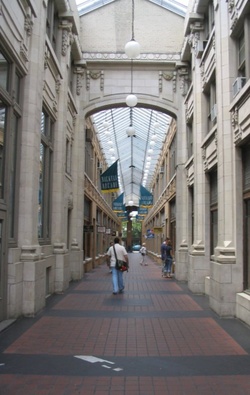 Looking down Nickels Arcade from the State Street end.

Nickels Arcade is a covered shopping district in downtown Ann Arbor, built in 1918. It's a short walk, we'll start on State Street.

A story in the Michigan Daily in 2009 reflects on the turnover in businesses in the arcade.

According to an Mlive article in late July, 2015, a 21 year old student fell through the glass ceiling to his death.

Nickels Arcade celebrates its Centennial this year and the Arcade and AADL are commemorating the milestone with exhibits, receptions and a digital history of the Arcade. AADL will host an exhibit at the Downtown Library beginning June 1, 2017, featuring photos, articles, and artifacts that tell the story of the first 100 years of Nickels Arcade. The Arcade "family" will have ongoing exhibits throughout the Arcade and a gala reception in July.

It's a mystery why State St. butcher Tom Nickels decided to build an elegant shopping arcade. According to his family he'd never seen an arcade, yet the one he built is breathtakingly beautiful. His descendants still own it, and four generations of family members are convening this month to celebrate its 100th birthday.

A walk through Nickels Arcade, December 2017 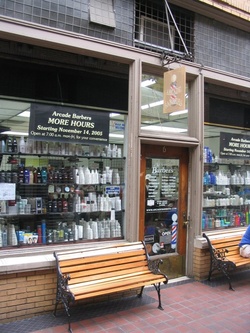 The front of Arcade Barbers. 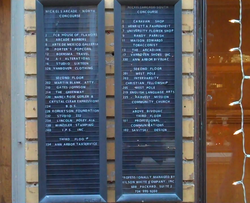 This 2009 arcade directory lists several businesses that are no longer there.