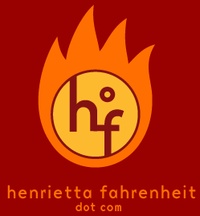 Henrietta Fahrenheit first opened as a retail store in downtown Ypsilanti in 2002, overhauling a storefront that had been vacant for a decade. The store later moving to Nickels Arcade in Ann Arbor. The store's bricks-and-mortar presence eventually gave way to an online-only store, though they could also be found at such events as the Shadow Art Fair. On May 6th, 2008, the website announced that they would be closing; by May 2010, the former web site went to a generic placeholder page.

I disagree. I think Henrietta Fahrenheit was just a business ahead of its time. Proof? Guess who co-organizes The Shadow Art Fair to rave reviews every year? Albaum et. al. Shadow's organizers were all connected through Henrietta Fahrenheit, and the Fair is what Jennifer hoped the store could have been. But she says she has no regrets, and would do it again. Except this time, she's going more mainstream - she wants to do a down-home southern vegan restaurant.