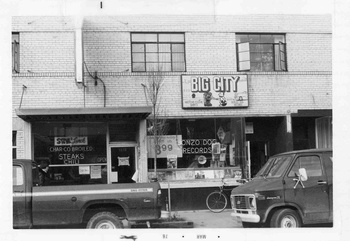 THEY APPEAR TO BE CLOSED: http://www.yelp.com/biz/steves-lunch-ann-arbor

On my last visit to A2, I passed by what used to be Steve's Lunch...now it's something else. Before everyone forgets about it here are some tidbits on the place my parents Mr. and Mrs. Lee used to own in the 1970s.

Steve's Lunch was a diner located at 1313 South University that was owned in the 60s and early 70s by an elder Greek man named Steve Vaniadis (hence the name). No tables - just one long counter top with round, red, rotating (on a post) stools. Until my parents purchased it, the place served up typical American style food - burgers, hamburger steaks, deep fried shrimp/scallops, etc. 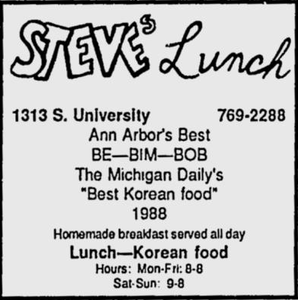 Circa 1972 it was purchased by a Korean couple by the name of Goom Sook and Wan Youl Lee. Until then Mrs Lee was a geneticist and Mr Lee worked for the U o f M in biostatistics and aerospace (First Mars probe). However, they were tired of working for other people and decided on a restaurant. They soon would be affectionately known as Mr and/or Mrs Lee as they began to add a Korean "flavor" to things - chap che, bi bim bop, kimchee, and the famous beansprout and cheese omelette. Mrs Lee also instituted daily specials such as Hungarian Gulash, Beef Stroganoff, New England style clam chowder, and beef barley soup. They were often known for their unique and outgoing style and weekends were a madhouse with people standing impatiently behind occupied stools.

The place became a regular hangout of some of football players—Billy Taylor, Rick Leach, Billy Dufek, Larry Gustafson and Paul Seymour to name a few. And God help them if they showed up after a loss. Mr Lee was an unforgiving loyal Wolverine fan. But no sooner would he lambaste one of them for making mistakes on the field and losing than would he refuse to take their money when it came time to pay the tab. "Do better next time—that's what you owe me! WIN or I'm coming after you!" he would say with a big smile and a warming laugh that reassured all he wanted to see them again regardless of the outcome of any football game. The (now) part owner of Zingerman's Paul Saginaw and Mike Monahan (Kerrytown Fish Market) used to frequent the place on a regular basis and catch hell from Mr. Lee for his outlandish Jewish "fro". "Do something with your life. Don't waste it" he would warn Paul. BTW Paul, you still owe Mr Lee's son some boric acid—no, he didn't forget ;)

Steve's Lunch was a cultural institution and the first diner in Ann Arbor to impart a Korean influence. In the late 70s Mr Lee suffered a stroke and they decided it was time to get out. It was sold to many different owners after that but was never quite the same. It's gone now, the way of the Bagel Factory (is Bicycle Jim's or the Pan Tree still around?) and replaced by Rich JC in the same place. So many people have come and gone through that weathered glass pane door...so many wonderful stories. Billy Taylor, if you ever read this, my father got your note but he was too sick to answer. He really loved you guys!