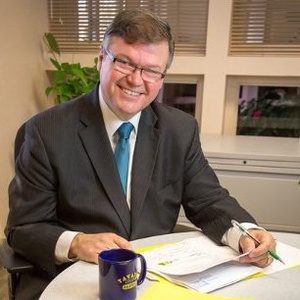 Stuart Blacklaw is provost and vice president for instruction and student development at Yavapai College in Prescott, Arizona. He was previously vice president for instruction at Washtenaw Community College in Ann Arbor, Michigan. Raised in Chelsea, Michigan, Blacklaw attended Olivet (MI) College (B.A. in Communication) and worked in radio, television and print journalism before attending the University of Michigan, Ann Arbor (M.A. in Telecommunication Arts (Radio/Television/Film)). After two more years in the media, Blacklaw became an assistant professor of Communication at his undergraduate alma mater, where he taught media courses, advised student media and other organizations, and served administrative roles as a program director, a department chair, and president of the faculty. He won awards for leadership and for teaching, including the Livingston Professorship, the highest faculty teaching honor awarded by Olivet College.

Blacklaw completed most of the coursework toward his Ph.D. in the Center for the Study of Higher and Postsecondary Education at the University of Michigan before leaving for New York. He completed the coursework and dissertation through Capella University, earning the Ph.D. in Higher Education, Academic Administration in 2008. His dissertation identified best practices in the development of assessment strategies that lead to instructional improvement.

In 2013, Blacklaw was named to his current position.