The Sidetrack Bar and Grill is one of the most popular bars in Washtenaw County, located in Ypsilanti's historic Depot Town. There has been a bar at this location since the mid- to late-1800s, with early incarnations catering to railroad workers. Frenchies is right next door, and is used as overflow for the Sidetrack crowd or private functions. 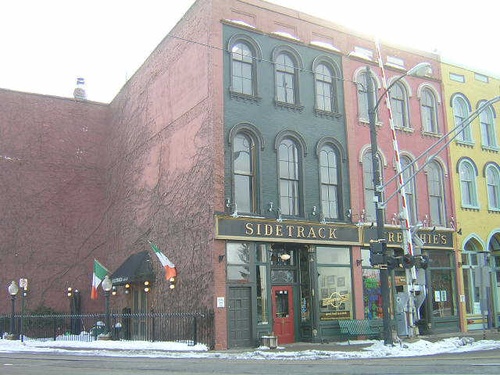 The Sidetrack, and Frenchie's next door

The Sidetrack takes its name from the tracks that run right by it; in 1929, an eastbound train carrying a load of lumber jumped the tracks and demolished the end of the building, now a patio. Famous for its burgers and "ridiculously cheap" happy hour (including "late night happy hour" starting at 10pm), it is a popular retreat for locals during and after U of M football games. While it's place on GQ Magazine's "best burgers" list is for the beef, the 'track additionally has good vegetarian / vegan fare, including black bean burgers and tacos, and tempeh burgers and sandwiches.  They also offer Gluten Free options as well.  They have a gluten free bun as well as beer. They also have a killer late night happy hour with great beer prices!

Like much of Depot Town, it is controlled by a member of the French Family; this one is Linda French, with the help of her daughter Jessica French.

In 2009, the Sidetrack played the role of Aden's Pub during the filming for Hillary Swank's movie Conviction

Here is one of my core culinary credos: The closer you come to a college campus, the worse burgers get. Sidetrack Bar and Grill—named for its location next to an old railroad siding—is an exception. This modern-looking pub, around since 1850, doesn’t seem concerned with pleasing undiscerning Eastern Michigan University freshmen. “We don’t get much of a young crowd,” my waitress said. The meat, a secret blend, tastes like chuck. The sesame-seed bun is small, soft, and grilled. I recommend a visit to the automobile museum across the street, although they won’t let you play drive-in and eat your burger in a vintage car.

The Depot Town district building did not always have this angle, and for many years there was a small shop in the corner. This changed on the morning of Monday, Jan. 21, 1929, when a train car crashed into the side of the building.