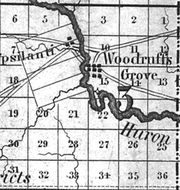 First settled in 1823 by Benjamin Woodruff who came here with a party from Ohio, at a location originally used by Gabriel Godfroy as an Indian trading post. John Bryan became the first postmaster in 1825; the post office closed in 1828.

This settlement became part of what is now Ypsilanti. A marker was placed at the intersection of South Prospect and South Grove streets in 1923 by the Ypsilanti Chapter of the Daughters of the American Revolution.